This year, the Blenheim apricot won the bloom off competition in the garden. The apricot buds broke on Valentine's Day.  Each year the Santa Rosa plum blooms 1st.  This year I was worried that the tree had died.  It's simply confused like the rest of us - mild winter, no rain, swamp pants season starting waaaaay too early.  The plum finally bloomed on February 23.  Strange.  I thought the date would have been one of the earliest because of such mild conditions.
There was a skiff of rain today.  Nothing really.  All the fruit trees in the garden have below surface irrigation.  I prefer to apply the water by hand to the surface allowing the water to seep in deeply to encourage the roots to push deep rather than pushing up to the surface for moisture.  I'll be switching to below surface irrigation soon to avoid evaporating precious resources.  Surface flooding will only occur when fertilizer is applied every 6 weeks or so.
I'm having problems posting using Googles device.  This post was finally created using the app which is very limiting. Anyone else having a similar problem? 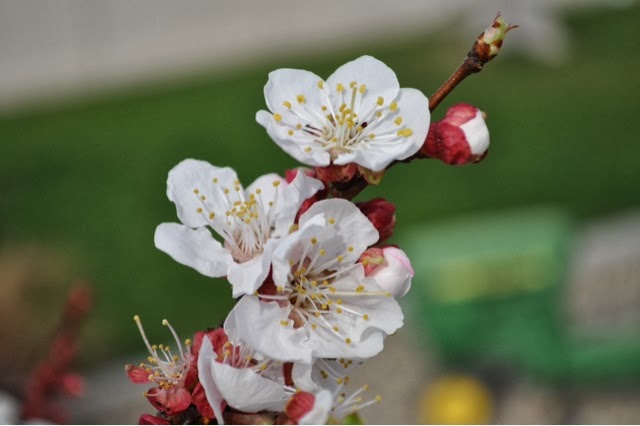 Posted by MAYBELLINE at 9:47 PM

Our trees are doing nothing, nothing at all.

Hope this little storm is coming your way, too, with some much needed rain!

Maybelline, it's amazing to me that plants and trees know when to start blooming and waking up in the Spring. Nature is quite resilient in survival. We here in Nebraska are still in the deep freeze. Actually, we are ahead just a little on moisture but the temps are predicted to be below zero with snow again during the night time hours for the next couple days. The sunshine today will be enjoyed as much as possible with a high of 19. The Farmer's Almanac claims this Spring will be another cold and wet Spring like last year. Gardens will suffer and be late harvesting again. It's difficult to know when to start seeds when the weather has been so crazy the last couple years.

Have a great water control day.

I hope you will get some significant rain in your part of the Valley over the next few days. I like the way you referred to a "skiff" of rain. That's a new word for me, and I intend to use it but hopefully not for awhile!
I haven't had problems posting pics with google, knock on wood. I thought my pics were with Picasa. I hope you get it to work. I know how frustrating that can be!

I never thought that the term "skiff" was unusual. My mother is from Edinburgh and that's a common term used by her. I'm feeling rather bilingual now.

Skiff: A light shower of rain, usually in summer.
'Nivver worry, it's only a wee skiff.'

We've burst into Spring up in NorCal. And the almond trees are just starting to bloom. But you are still weeks ahead of us. HOpe you are getting your share of these storms.