Off With Their Heads!


The boysenberries are all set for the winter.  All of the suckers were removed along with any other unwanted canes.  The canes that emerged this summer (primocanes) have been tied up to the supports where the growth will be pruned to keep it in bounds of the support.  In early spring, the primocanes become floricanes when blossoms form followed by fruit.  When the harvest is complete, the canes that are tied to the support are then removed and the process starts all over again.  Some compost rich with chicken manure was applied even though organic fertilizer was put down about 10 days ago.  These plants, like me, are ready for cold weather. 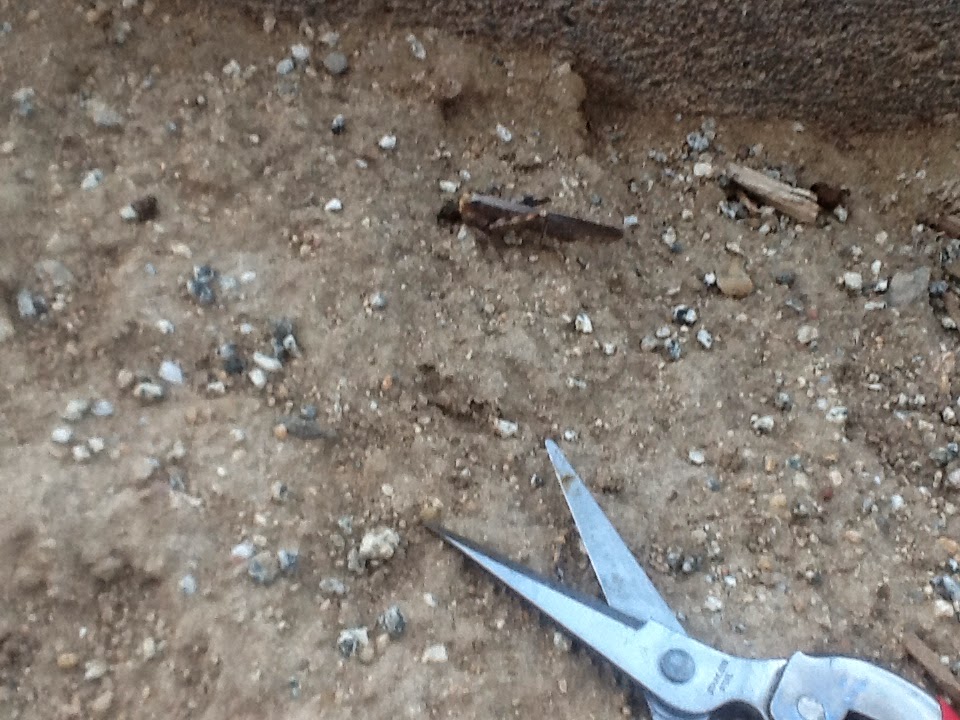 When I was cleaning up the boysenberries, I came upon an evil grasshopper.  Without missing a beat, my pruning snips went into action decapitating the beast.  BAM!  Now here's the creepy part...the body was hopping and flying without a head!  Nightmares.  Even creepier...the body was gone the next morning.  Perhaps it's in very poor taste to report on this beheading what with all the recent news; but this is what's happening in the garden and I'm in the mood for Halloween.
Posted by MAYBELLINE at 4:47 PM 4 comments:

Pollinators are nice, but are they leaving eggs full of hungry larva behind to munch on my seedlings?  Here's hoping for some very cold very wet weather this winter.
Posted by MAYBELLINE at 11:09 AM 2 comments:

Life and Death in the Garden

WARNING:  Images may not be suitable for the weak of heart.

Lots going on in the garden as preparations for fall/winter are in full swing.  All the raised beds have been planted.  Two beds are full of mustard to produce green manure for soil nourishment.  The other two now have a variety of lettuce, beets, carrots, broccoli, cauliflower, and peas.  The garlic just arrived in the mail today; so that will get planted soon. 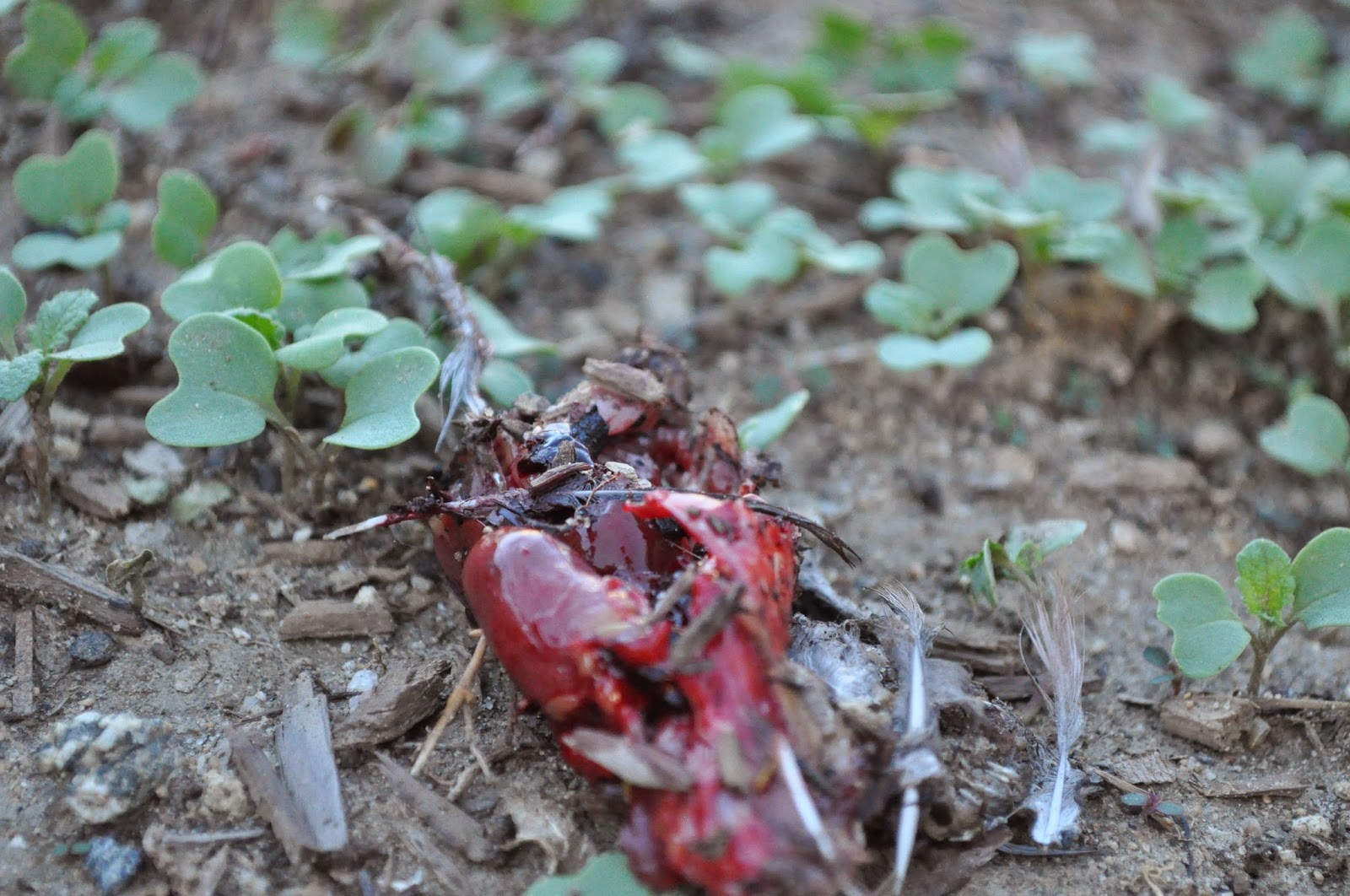 My first pests in the garden are the mourning doves.  Those turkeys eat the seed, make filthy nests, and breed like rabbits.  As the sun rose this morning, I discovered the warm remains of one of those pests right in the middle of my young mustard.  Yeeeek!  I don't have garden kitties anymore; so what did the butchering?  Perhaps a bird of prey swooped in before sunset.  An owl?  We have those in the neighborhood.  Hawks hang out here too.  As I looked for clues, fresh kitty poop (warm like the dove bits) was discovered barely covered by the path gravel.  Filthy beast.


Other pests have been discovered in the raised beds.  The University of California Cooperative Extension in Davis (The internet is a wonderful thing.) identified this wee beastie as a Bagrada bug and it doesn't have any predators (besides me).  Oh yes.  This bug thrives on mustard, broccoli, and cauliflower.  Great.  Just great.  This afternoon, there was a Bagrada bug orgy going on in the garden.  If they win, I may be kicking back this winter and buying expensive produce that doesn't taste as great as fresh from the garden.  Until then, I will remain vigilant/vigilante.
Posted by MAYBELLINE at 4:59 PM 2 comments: 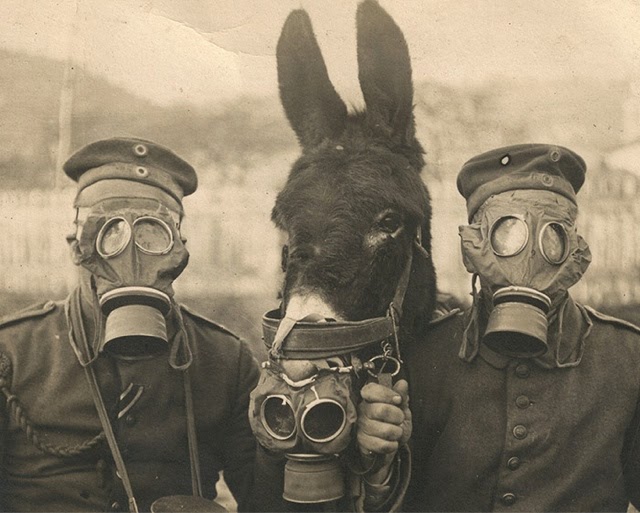 Here's how the mustard plant works to fumigate nematodes according to Territorial Seed Co.:
Brassica juncea 80-90 days. This unique plant can be used as both a green manure and a natural soil fumigant to fight nematodes. An organic alternative to using chemical applications of Methyl Bromide. Columbia basin wheat growers use it to reduce the nematode populations between wheat crops. When worked into the soil, Mighty Mustard Kodiak releases high levels of glucosinolates, a natural chemical agent that makes some brassicas spicy. When soil pests come into contact with the decaying matter and the fumes of decomposition, they are unable to complete their lifecycle. For use as a fumigant, mow down and work into the soil immediately. As a fast growing cover crop, Mighty Mustard Kodiak can produce 4-5 tons of organic matter from 6 foot tall plants in just 80-90 days. To utilize as a cover crop, mow and leave it on the ground to dry down before working into the soil. Not only does this mustard recycle existing nitrogen from its long tap roots, the plant itself has a high protein and nitrogen content and will greatly increase the soil's fertility and tilth. The best practice with cover crop mustard is to mow while in flower and before seed-set to ensure it doesn't reseed itself. Unless of course, you would like to save some seed to create your very own savory Oriental mustard! Sow spring to summer at ¼ pound per 1000 square feet; 6-10 pounds per acre.
I believe mowing the plant before seeds are set should insure the mustard plant doesn't become a mess.
Posted by MAYBELLINE at 9:48 PM 3 comments: 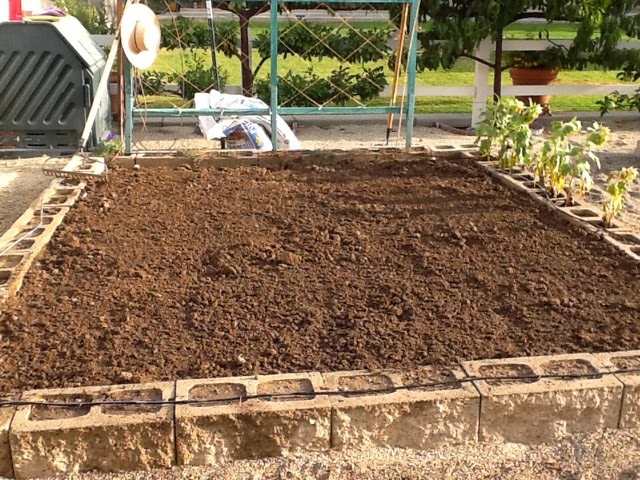 I took advantage of some very rare cloud cover this morning to take on some fall garden tasks. (Fall in spirit only because the temp today should be just under the 100 mark.). More experimentation regarding root knot nematode control by planting a cover crop of mustard got under way by cleaning and raking the soil. Two beds are being set aside for this green manure application. Once the mustard blooms, it needs to be cut down and turned under before seed is set.  The chemical formed is repulsive to root knot nematodes plus nutrients are added back into the soil. 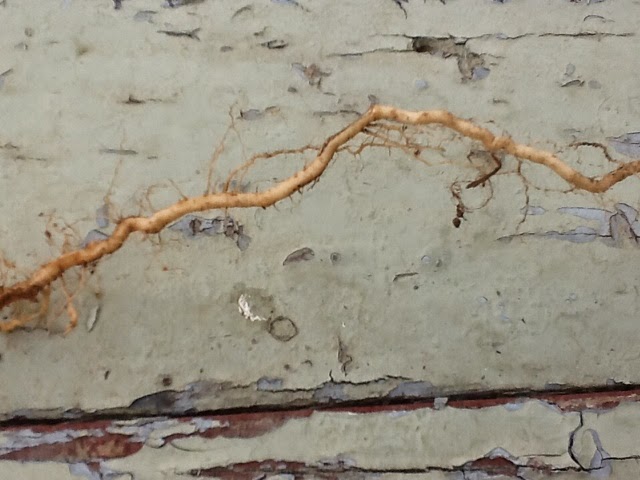 One of the two beds was solarized for over 8 weeks this summer.  The other bed grew peppers and tomatoes without any signs of the pest. Tomato roots show now galls formed.  These tomatoes were not nematode resistant; so I'm feeling better that the pest is being eradicated. 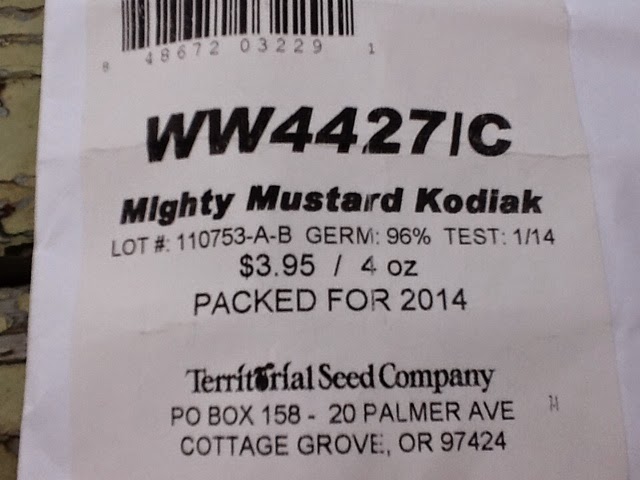 No rows were formed. I purchased the seed by weight to insure the bed will produce a full cover crop. As the temperatures cool, an application of beneficial nematodes will be introduced to all the beds. The beneficials will attack the bad bugs - including grubs. Earthworms are supposed to be safe from their attack. 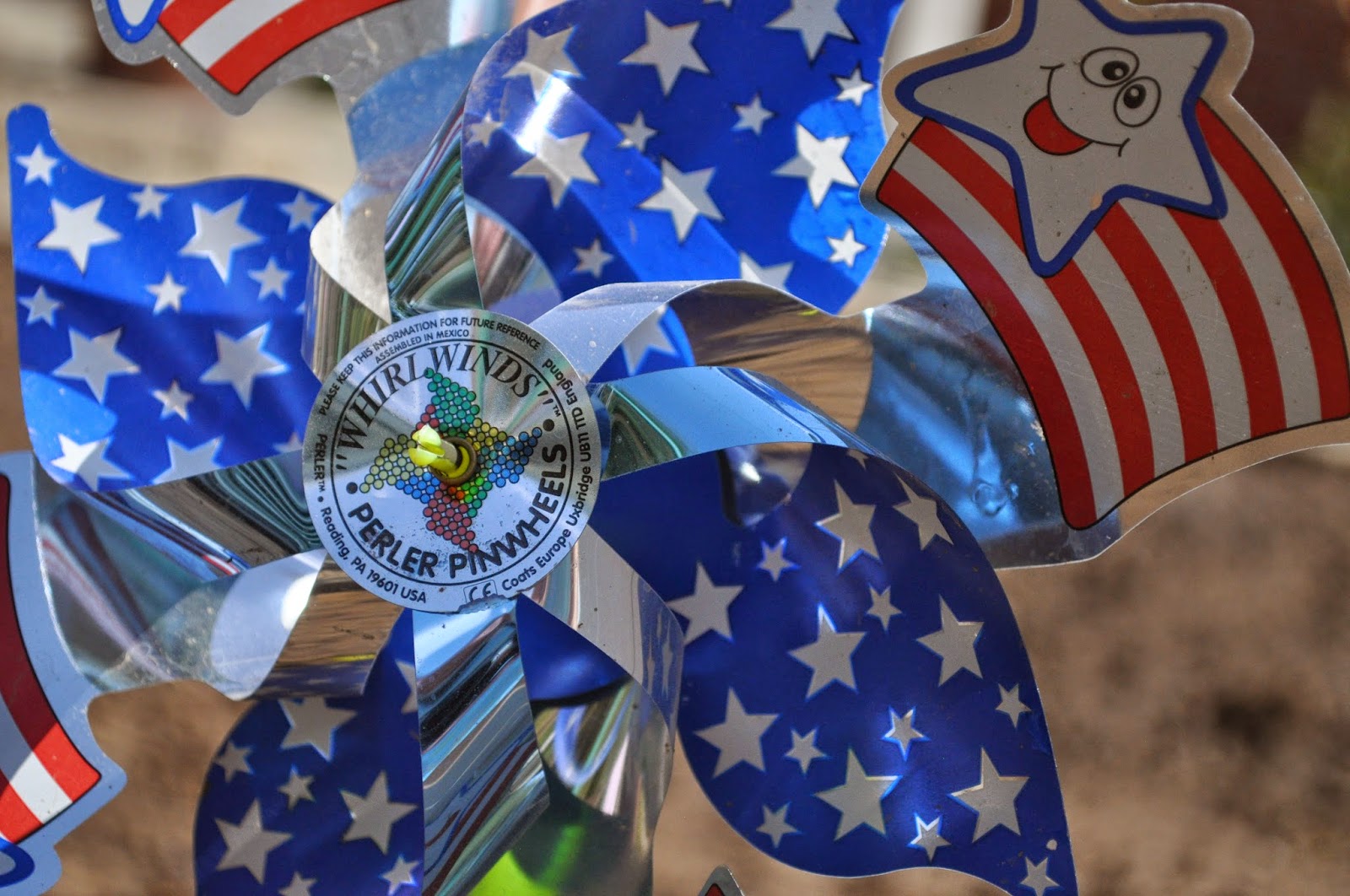 The current predator in the garden are the mourning doves feasting on my mustard seeds.  If they don't munch on my onion seeds, it's the mustard seeds.  Pinwheels from the 4th of July have been re-purposed as scarecrows.  So far so good.  But it's only been a few hours.  I'm a bit concerned if this mustard program goes biblical.

"He put another parable before them, saying, “The kingdom of heaven is like a grain of mustard seed that a man took and sowed in his field. It is the smallest of all seeds, but when it has grown it is larger than all the garden plants and becomes a tree, so that the birds of the air come and make nests in its branches.”"  Matthew 13:31-32

Garden hopes are are high that a cover crop of mustard will be great green manure making the soil fertile for seeds to come. 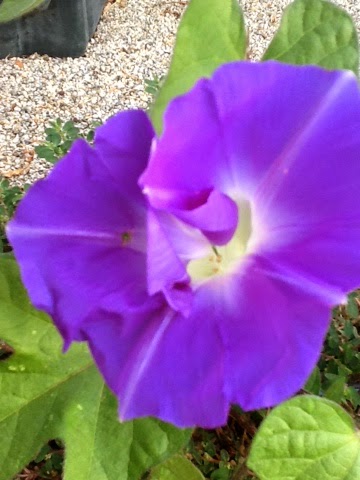