The first car I drove was an old 1962 Plymouth Valient.  It was a two door mint green car with push button automatic transmission.  I could hardly wait to drive when I turned sixteen; driving that car was an embarrassment to me.  It was not cool.  It didn't have fat tires, a cool paint job, or a neato radio.  I drove it to school but parked far enough away to not be associated.  Yes.  I was a typical teenaged jerk.
﻿﻿ Just a few years later (which seemed like an eternity), I had my very own VW.  It wasn't cool; but it was mine.  That 1968 Bug didn't have fat tires or a neato radio; but it did have a nice paint job.  I drove that car for about seven years.  Late one November night in 1985, I heard some noise out front. Two punks walking down the sidewalk aware goofing around with a giant pumpkin left over from Halloween that was destined for the dump.  I watched as that "trash" took that heavy pumpkin and smashed it onto the hood of my Bug.  In a flash, they were gone leaving behind my heavily dented car and a smashed giant pumpkin.  Those punks are still referred to as the Pumpkin Brothers.  Punks.

The pumpkin squashed the beetle back in 1985.  I hope 2012 will also be a winning year for pumpkins (rather, a pumpkin gardener) to squash beetles again - only this time it's the insect varity that is meant to suffer.
Posted by MAYBELLINE at 4:43 PM 1 comment:

In the late 1970's I saved up my money made from being a summer lifeguard to go towards buying a 1968 Volkswagen Beetle aka Bug.  My parents supplemented the balance of the purchase.  It had a new rebuilt engine and was oxidized orange.  The original color was red as revealed in the interior.  I had a sand block and sandpaper and began to sand away the orange paint.  This is one job I will never do again; but because I didn't have the money, I exerted the energy and time that I had in abundance.  Once I finished with the super fine steel wool it was off to the paint shop to be painted red.  It looked great.  I pampered my bug by covering it when it wasn't in use.  Me and my dog Lucy would cruise all over the place but mostly enjoyed the pastures in the hills at the mouth of the Kern River Canyon.  We would provide many points for anyone playing "Beetle" or "Slug Bug".

I never played the Slug Bug version growing up.  We played Beetle on long road trips from Bakersfield to San Ardo.  Bugs = 5 points.  Red bugs = 10.  Beetle Vans = 15 points.  Red beetle vans = 20 points.  Today, I play a similar game in the garden.  While working in the Pumpkin Patch, I pick, smash and squish Squash Bugs.  Those beastly pests are carrying on and reproducing like mad in the pumpkin patch.  Insects and eggs can be counted in the score.  I look forward to the cool fall morning when there will be no points scored.  So far, I'm holding my own with these fornicating beasts.
I know they outnumber me by a huge margin; but I keep on fighting the fight in order to try to win a few pumpkins this fall.  Seeds of Jarrahdale Pumpkins left over from 2011 were planted July 3, 2012.  Germination occurred just 3 days later.  Today, I spied a plump little pumpkin forming during my morning game of Beetle.
The plants seem healthy and vigorous with many blooms, tendrils, and healthy green leaves to provide shade to the rich soil in the raised bed.
Pollinators of all kinds are enjoying the blooms of late summer.  Hummingbirds, bees, and butterflies have been zooming in to sample the pollen.  It would be nice to have some fresh pumpkins to make pies at Thanksgiving.  I'll do my best to win the game of "Beetle".
Posted by MAYBELLINE at 12:52 PM 3 comments:

Mid to late August seems to be the best time for ripe O'Henry peaches in the garden.  This year, the tree has thrived by producing many more branches and leaves to provide more shade.  Fruit production was as abundant; but that's okay.  Getting this espalier tree growing strong and healthy is priority.  The peaches that did make it to maturity are very large, sweet and tasty.  Bird netting wraps the lateral branches to the frustration of the birds.  Fruit production from this tree isn't enough yet to bake a cobbler; so satisfaction with a fresh peach every once in awhile will have to do.

As the tree matures and production increases, I would like to try an unusual recipe for peach gnocchi.  I enjoy gnocchi and that recipe from 101 Cookbooks looks interesting.  Keeping the link here will serve as a reference for when there are so many peaches in the summer garden that a new recipe can be tried.  In the meantime, I would be interested to know reviews since the recipe is a little labor intensive.

PS...the recipe calls for champagne.  Don't know why white wine couldn't be used instead.
Posted by MAYBELLINE at 10:57 AM 2 comments:

Tender vining, compact shrub with glossy leaves and large, 3" dark red trumpet shaped flowers.  Great for hot, humid areas.  Water regularly and plant in a well drained acid, raised bed or container.  Protect from frost.
I picked up a red Mandevilla recently at Lowe's.  I do not typically purchase nursery items from box stores; but I was there while Farmer MacGregor was on a hardware run.  (He doesn't bother going to my favorite local hardware store - Floyd's.)  Now I'm searching for an unusual trellis.

This has been potted and placed on the east side of the pergola.  The pot rests on large pebbles in a saucer on terra cota feet.  It must be loving the recent hot, humid weather (aka swamp pants weather).

I also picked up a sweet potato vine.  It's a vigorous grower that can make a big impact.It comes in chartreuse or purple.  I like chartreuse. Sweet potato vines do best during the warm days of summer and prefer moist, well-drained soil. They thrive in sun or shade.  This guy is in a hanging basket on the west side of the pergola and receives hot sun from mid-day until sunset.

Other non-edible vines in the garden are Wisteria and Jasemine.  Wisteria grows on the pergola to shade the east side.  Jasemine grows on the east side of the house getting punched by the sun from mid-morning to early afternoon.  So far, so good.  Everyone seems happy.  That's good because it has been too danged opressive out there to tend to anything.

Come on October!  Let me hear you.
Posted by MAYBELLINE at 7:53 PM 4 comments:

Because it's hot and humid outside AND because I'm a wilting flower, this afternoon I played around with Windows Live Movie Maker. This effort is to chronicle the new patio that Farmer MacGregor installed this spring.  He's tired of waiting to see something posted regarding this nice work.

Note:  This is a novice attempt.   Hollywood has nothing to fear. Now sit back and enjoy your popcorn.
Posted by MAYBELLINE at 5:17 PM 2 comments: 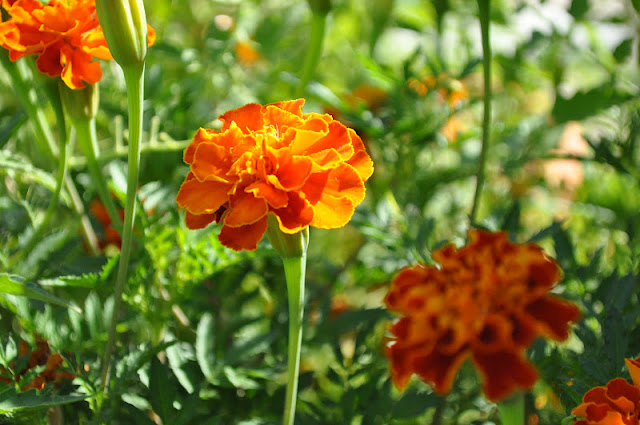 Root Knot Nematode damage was discovered in the fall of 2011.  French Marigolds are supposed to repel the boogers and starve them out.With that, seeds and seedlings were planted throughout the vegetable patch.  One bed in particular was going to be dedicated exclusively to the marigolds letting them reseed themselves then turn the spent plants under in the fall.  Sometimes plans just don't work out. 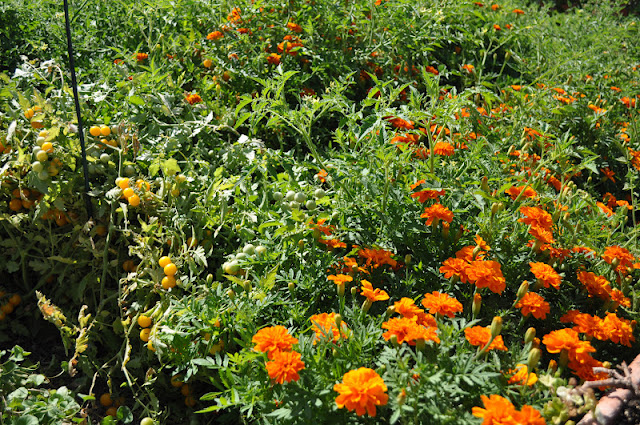 Volunteer Gold Currant Tomatoes have gone bonkers and are competing with the marigolds for turf.  The tomato plants are so loaded with the grape sized tomatoes that they constantly need to be restaked. This variety of tomato has been sprouting all over the garden this summer.  Why fight it?  If something good wants to grow with little to no work, I'm all for it.

Marigolds (Only the French variety are supposed to repel nematodes.) were also planted in the planned tomato patch.  The tomatoes (Celebrity) are nematode resistant.  So far so good.  Asparagus was also planted to end the pest problem.  Again, so far so good.  Basil seeds were sown throughout this patch along with oregano.  Bingo.  Everything seems to be working fine.  If Root Knot Nematodes still exist in the beds, they are not causing any problems.  With crop rotation and continued use of my new French friends, this problem should only be a memory.

Now I need to research what to plant in the fall to continue this success.
Posted by MAYBELLINE at 7:48 PM 5 comments: