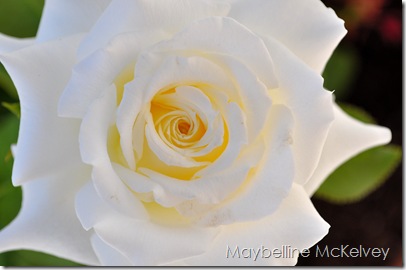 Jackson & Perkins® Rose to Honor Pope John Paul II – 2007 growing in a pot in my backyard a few miles south of Wasco, California.

If you like roses, then Wasco, California is the place to be this weekend.  Each year the town has a Rose Festival on the 1st weekend following Labor Day. 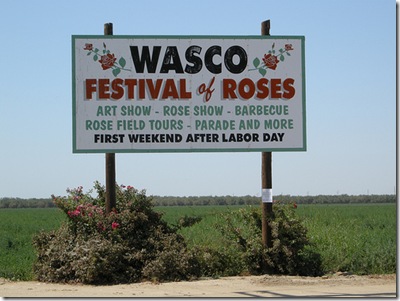 Welcoming sign at the entrance to Wasco, California.  Note the roses at the base of the sign posts?

The featured rose at the Wasco Rose Festival is (I know.  The sign reads Wasco Festival of Roses.  No one and I mean no one calls it that.) is the Lynn Anderson.  Isn’t that a crack up?  “I never promised you a rose garden.”

Oh, I used to attend.  We would pack up and watch the Rose Parade (not the Pasadena variety) where the town mayor, going by the name of Goob (short for Goober) would shout from the float to my mother-in-law, “Heat!”  “Heat” is short for Heat Lips.    Her group of friends could party like there wasn’t ever going to be another Rose Parade.  They probably still could drink me under the table.

Boy, I just got sidetracked.  The Rose Festival has a carnival, arts and crafts fair, dance, rose field tours,  rose competition, and a Rose Queen.  The carnival had rickety rides that the kids enjoyed even though it was usually hotter than Hades.

For about three days, Wasco is everything roses.

I haven’t gone in a few years.  The kids all grew up and the temperature never really cooled.  The rose growers, I’m told, are taking out the roses and replacing them with almonds.

Maybe the Wasco Rose Festival will be renamed the Wasco Almond Festival.

Posted by MAYBELLINE at 9:13 PM

Why do I never hear about these things until the last minute? This sounds fabulous. I sense another roadtrip to the Bakersfield area is in my future.