On February 14, 2009, I planted Little Marvel peas (bush vine variety) from seed straight into the ground. Those germinated about 14 days later on February 28. I then planted a 2nd crop adjacent to the 1st. Since these are bushy, not much room is needed. 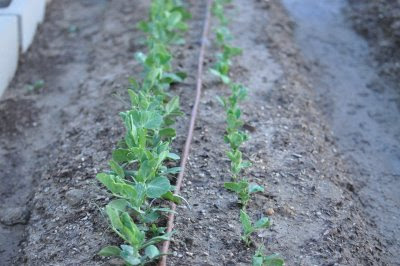 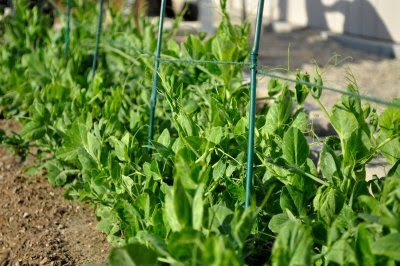 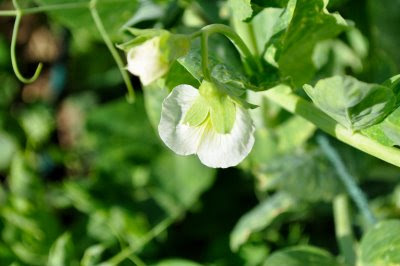 April 18, 2009 approximately 60 and 50 days since planted.
I harvested on May 2 and continued until May 22. On May 22, I pulled out the plants because they could bare no more. It just gets way too hot here in the summer time. The plants now reside in the composter and their bounty was consumed mostly in the garden, raw in salads, or blanched and frozen to enjoy later. On May 24, cantaloupe was transplanted where they once produced.
Posted by MAYBELLINE at 9:57 PM

how beautiful! I am so thankful for these photos and the information. I would not be able to stop snacking on these.

I am wondering how many people are in your household but no matter what, I am going to keep planting more peas in my garden. With only four little growing pea shoots we are definitely going to want more producing pea plants.

Hmmm. I should be not that far behind you. But the weather in Northern California has been so wacky -- drought, then deluge, then cold (didn't get over 65 in Sonoma today) -- that none of my plants know what season it is.

Siren: There are only 2 of us in the house now. The birds do come home to eat once in a while though. Try blanching your peas and freezing them to enjoy later. I can't stand canned peas. Be-yuck!

Thanks for stopping by...I think the garden gods just answered my prayers! This morning while I was picking some snowpeas I wondered for how long they'll produce. Our weather does not go beyond 90°, even through summer, so if the temps are nice I guess the peas will keep producing until they putter out? I can't sow direct in early spring because our soil in the northern alps is frozen solid. I always start indoors then transplant outdoors into the ground or container when the weather has warmed to 60°. I notice the ones in the ground take forever to grow bigger, but then I guess I'll have more peas to look forward to.