I thought that the Crimson watermelons were less than the size of a golf ball at this stage. The vines are loaded with melons; but they're dinky still. Yesterday, I went out to gather the zucchinis (They are rabbit like in their breeding!) and I found 3 melons had been developing in the holes of the cinder blocks that form the raised beds. Carumba! They are larger than softballs. What a pleasant surprise. 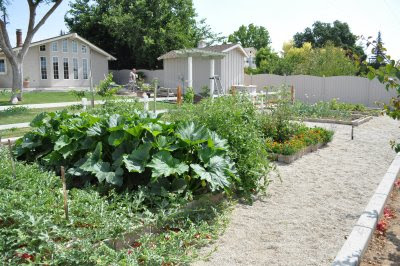 Melons have taken over where the cantaloupe once played. They are now marching into the zucchini. See the melons in the left of the photo above? 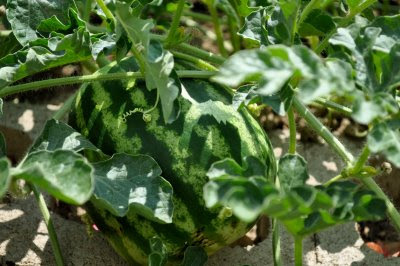 This sweet thing was growing in a hole of a cinder block that forms the raised bed. 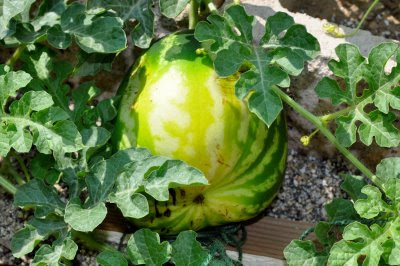 Here's another baby that I moved out to the gravel pathway to mature. 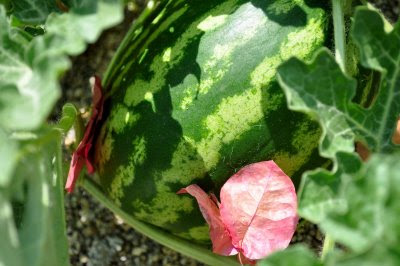 I was tempted to leave them in their cubby holes and see if they would form into square melons. Then, I couldn't figure out how I would get them out; so they are now developing on the gravel pathways. Note: The cantaloupe that were evicted because of the monstrous growth of zucchini and water melons are beginning to thrive. It was touch and go for a bit; but I believe all 6 plants are going to make it.
Posted by MAYBELLINE at 3:23 PM

Wow! Those are some big melons. (Funny, people say that to Salma Hayek all the time.) What a difference between Northern and Southern California. I don't even have fruit on my watermelons.

I am envious! I tried to grow two types of watermelon from seed this year but each time a seedling emerged I found it had been plucked, probably by the scrub jays that live in my yard. The first-time the seedling was left, sadly uprooted on the planting hill. The second disappeared entirely. After considering replanting I realized that section of the garden probably didn't get enough sun for melons anyway. I got two watermelons last year but they didn't get much bigger than yours are now. So I agree with Lisa, your neck of the woods is probably a little better suited to growing watermelons as they typically have a long cultivation period. I did get several cantaloupe last year but did not plant any this year due to lack of garden real estate.

Christine: I've become friends with the scrub jays. I leave them caterpillars and grubs on my garden wall to serve as their buffet.

You know I have offered ours snails, placing several on the fence one day, but alas had no takers. They do eat seed from a dish on the picnic table. I am hoping we will be friends with a mutual understanding one day!

Your watermelons look wonderful. Mine were very slow to germinate this year and are only now starting to grow. Very nice blog, I'll put it on my reader.

What a thrilling surprise! (I know I'd be!) My watermelon seedlings have gone absolutely nowhere as the weather has been so flaky lately. Not enough heat! they cry. I don't care if you give us food and water, give us heat!

It doesn't help either that my doxie has taken to the watermelon patch as his personal digging grounds.

Wow! Your melons are WAY ahead of mine.....when did you plant?

Maureen: I believe I planted them in early April. It will truly be amazing if I ever keep a garden journal.

We have a lot of spotty moisture in the Midwest, so melons are hit and miss.

BTW, your pooch is adorable.