This past Saturday (10/26/13), Farmer MacGregor and I took on some much needed garden chores.  He did the bulk of the work because I can't (Surgeon's instructions not to bend, lift or twist - dang.) and I was still decompressing from the Vince Gill "Bakersfield" concert the night before.

The boysenberries had grown into a jungle this summer.  There are 6 plants.  The gravel walkway in the picture above was hidden with the growth.  This variety certainly thrives in this environment. This area was previously planted with azaleas and camellias.   That was very unsuccessful. The canes that bore berries this year were cut down to the ground and removed from the support.  5 new canes were chosen to be attached to the support for berry production in 2014.  The rest of the canes were cut to the ground and removed.  There were plenty of volunteers that were removed.  These certainly can get away from you if you don't tend to them.  Speaking of volunteers...note the grape tomatoes overflowing from one of the raised beds.  I cannot shake those Gold Current tomatoes so I just let them keep producing. 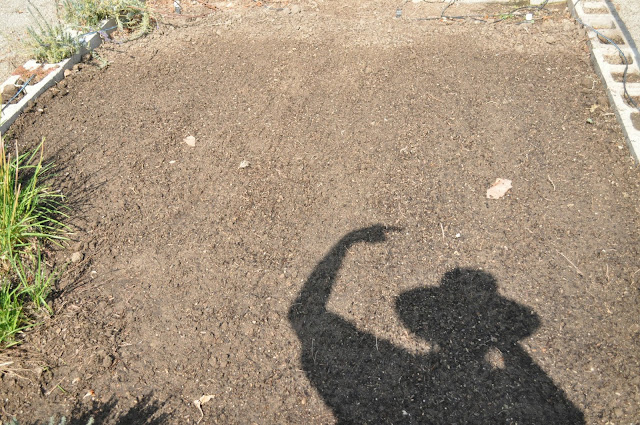 One of the raised beds was prepared for some winter vegetables.  Nothing was planted in rows.  I can't get down there to sow a Jeffersonian garden.  Seeds were scattered for a "natural" look.  On the east side of the bed, lettuce varieties were sown. 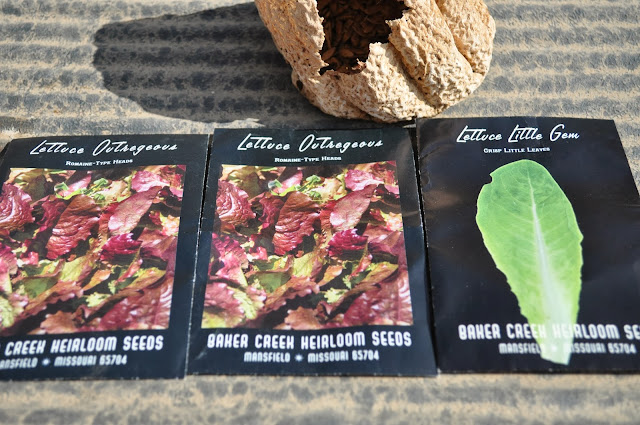 Outrageous (left) may be the reddest lettuce variety known! It can be harvested as a leaf lettuce or allowed to grow until the loose, Romaine-type heads develop.  The catalogue uses the name Outredeous but the seed package is Outrageous.  Little Gem (right) germinates in 50 days. It is a very small, green, romaine-type. One of the very best-tasting lettuces. A superb heat-tolerant variety. 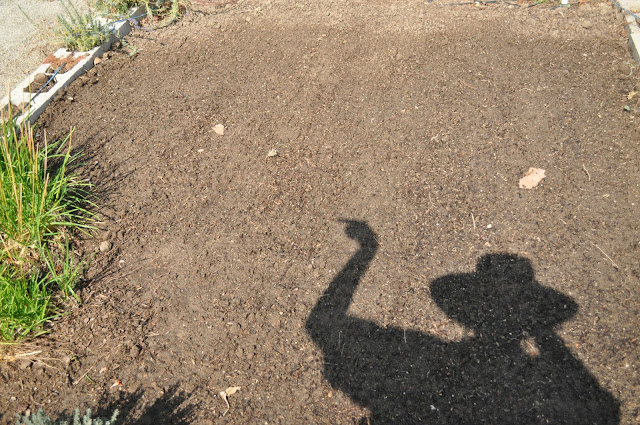 The west side of the bed was planted with bunching onions.  These should grow well with the existing garlic chives.  No drip lines were laid out.  The seeds will get moistened by hand until they are established.  Hopefully, the rain will come (it did yesterday!).

(Allium fistulosum) A popular and traditional Japanese variety for sukiyaki, soup and salads. It reaches enormous proportions (to 2½ feet tall, one inch across) while remaining tender and scallion-like.  It never forms a bulb. Earth-up as for leeks to produce long white shanks. As they sprout, they will be pulled and used as green onions.

All the espalier fruit trees have been pruned and will not be pruned until just before blossom and only if needed.  My hope is that the Warren Pear will bloom - finally.
Posted by MAYBELLINE at 11:11 AM

Always like finding new varieties of lettuce to try.
Will look into these for next spring.

Aren't you clever using your shadow to show where you planted?! I love that! I wonder if container gardening would be easier for you? Friends of mine have a 5,000-ft. garden, all in containers.
I'd love for you to share this on the Maple Hill Hop!
Isn't Vince Gill great in concert? ;0)
Have a quick recovery.

What a nice looking planting area you have! Looks like plenty of room for your winter veggies. I have heard good things about Baker Creek seeds, We had just a small amount of rain here but hoping for a wet winter!