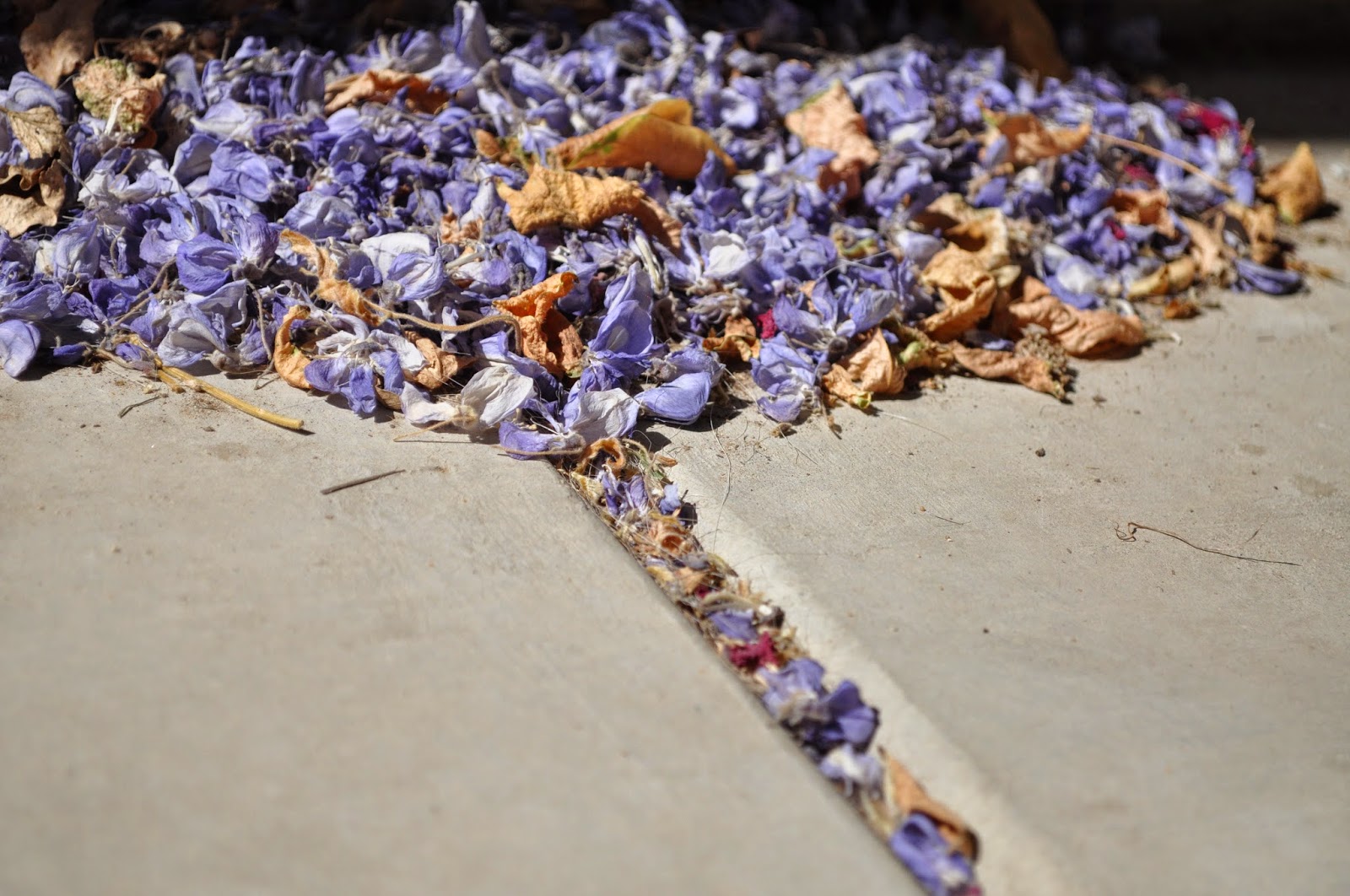 Wisteria drapes over the pergola providing shade during the summer.  The blooms start in the spring prior to the leaves and continue throughout the summer months.  Perfect.  Some folks do not like the "mess" blossoms from blooming trees and vines make.  I'm not one of them.  Purple confetti piles up each day as the petals fall.  The original tag used as a bookmark for "wisteria" in my Western Garden Book reads:  Blue Wisteria.  Wow.  That's basic information. 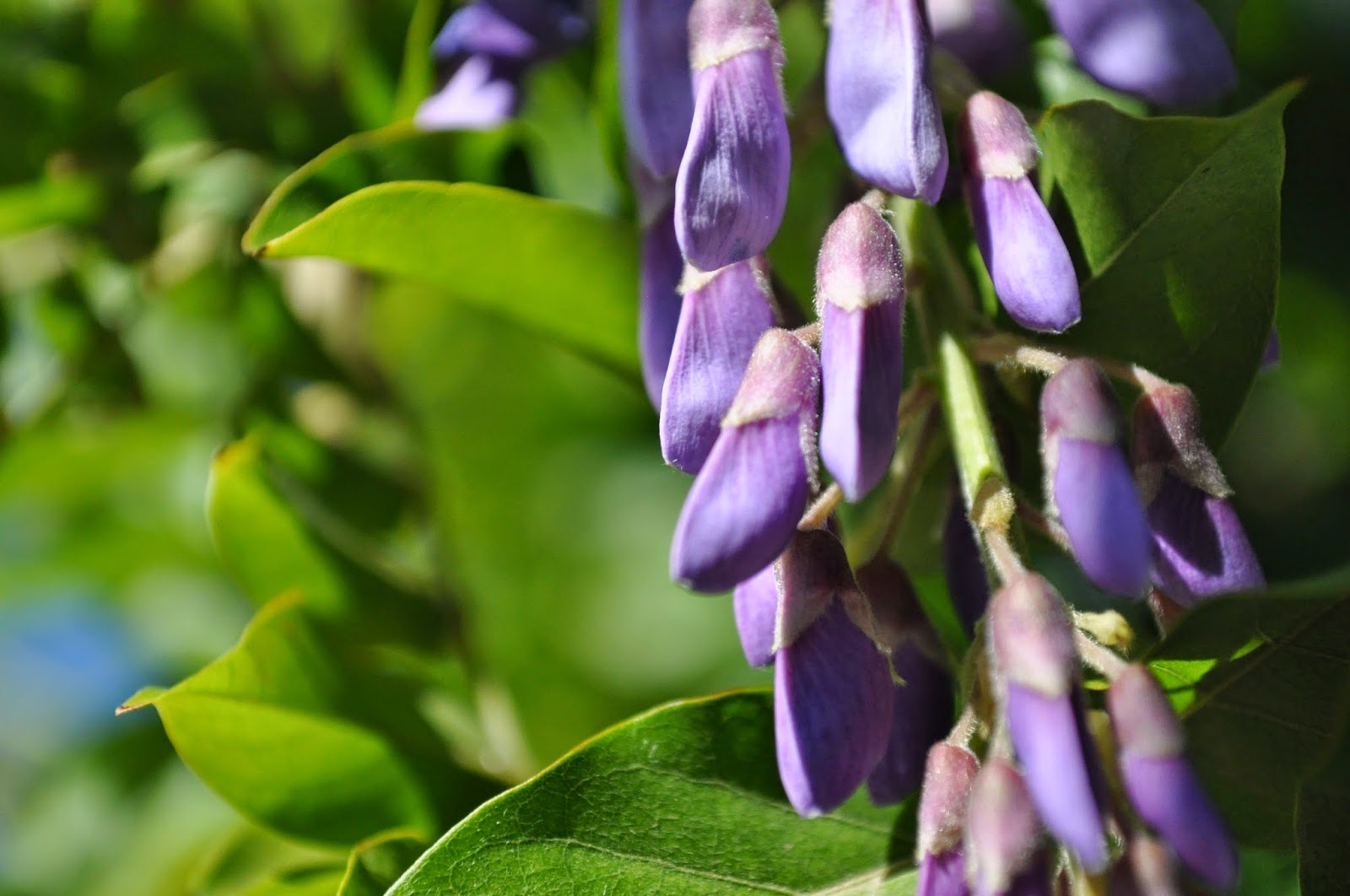 Both vines receive very light pruning as the growth pours over the edges of the pergola.  That pruning is supposed to be responsible for the continuous blossoms according to an old, local nurseryman.  I don't feed it intentionally. However, its roots may have spread enough that it may feast on the fertilizer I provide to the neighboring roses. 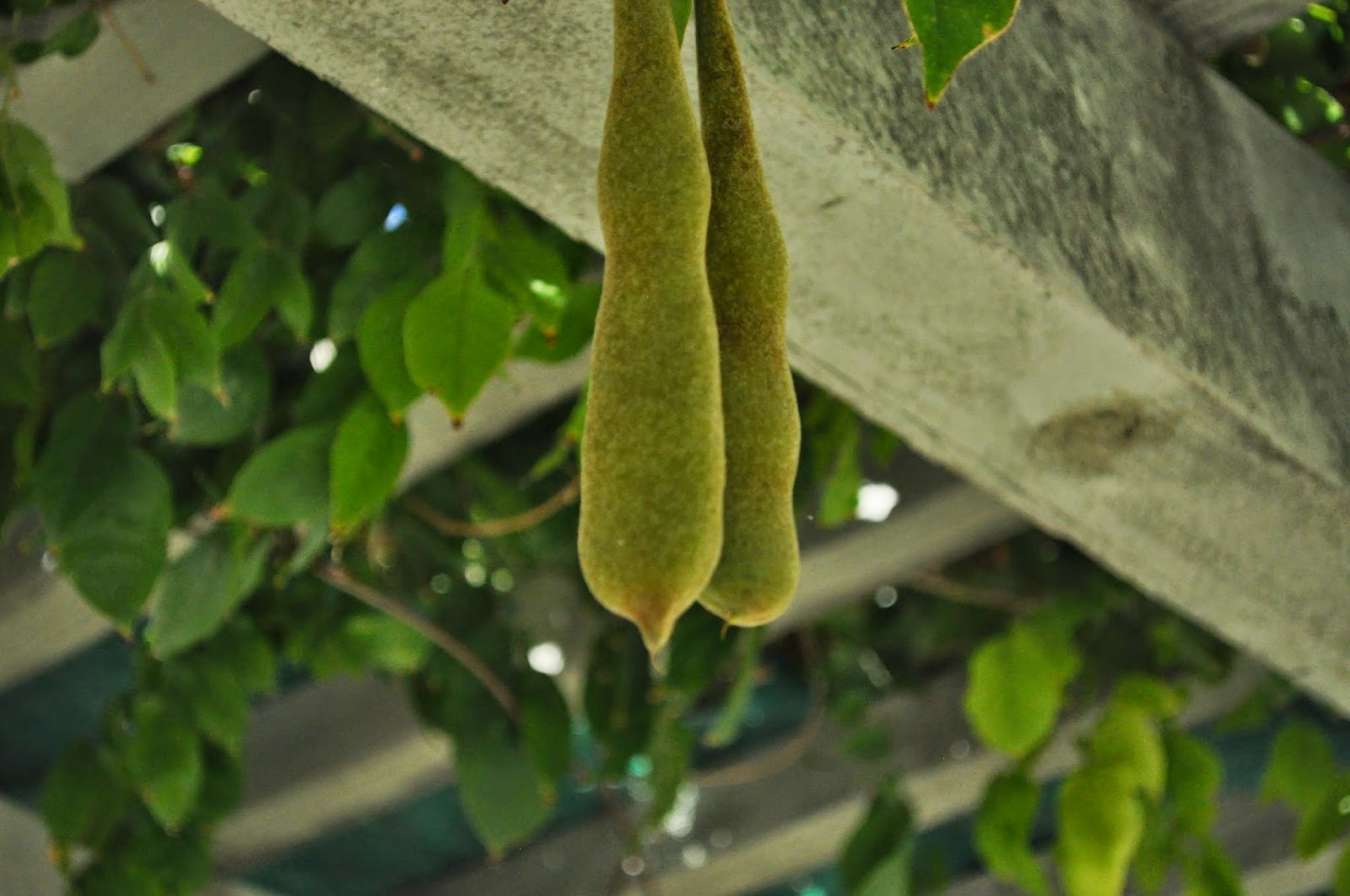 Its fuzzy seed pods resemble a green version of something hanging from a Brahma bull.  Well, not really.  Perhaps the Grinch.  The seeds in the pod look like squished Milk Duds.  Those pods and seeds can be discarded or used for decoration when they dry.  The seeds would make dandy BINGO markers.  I do not encourage the seeds to germinate though.  Control of these vines is essential to prevent an invasion. 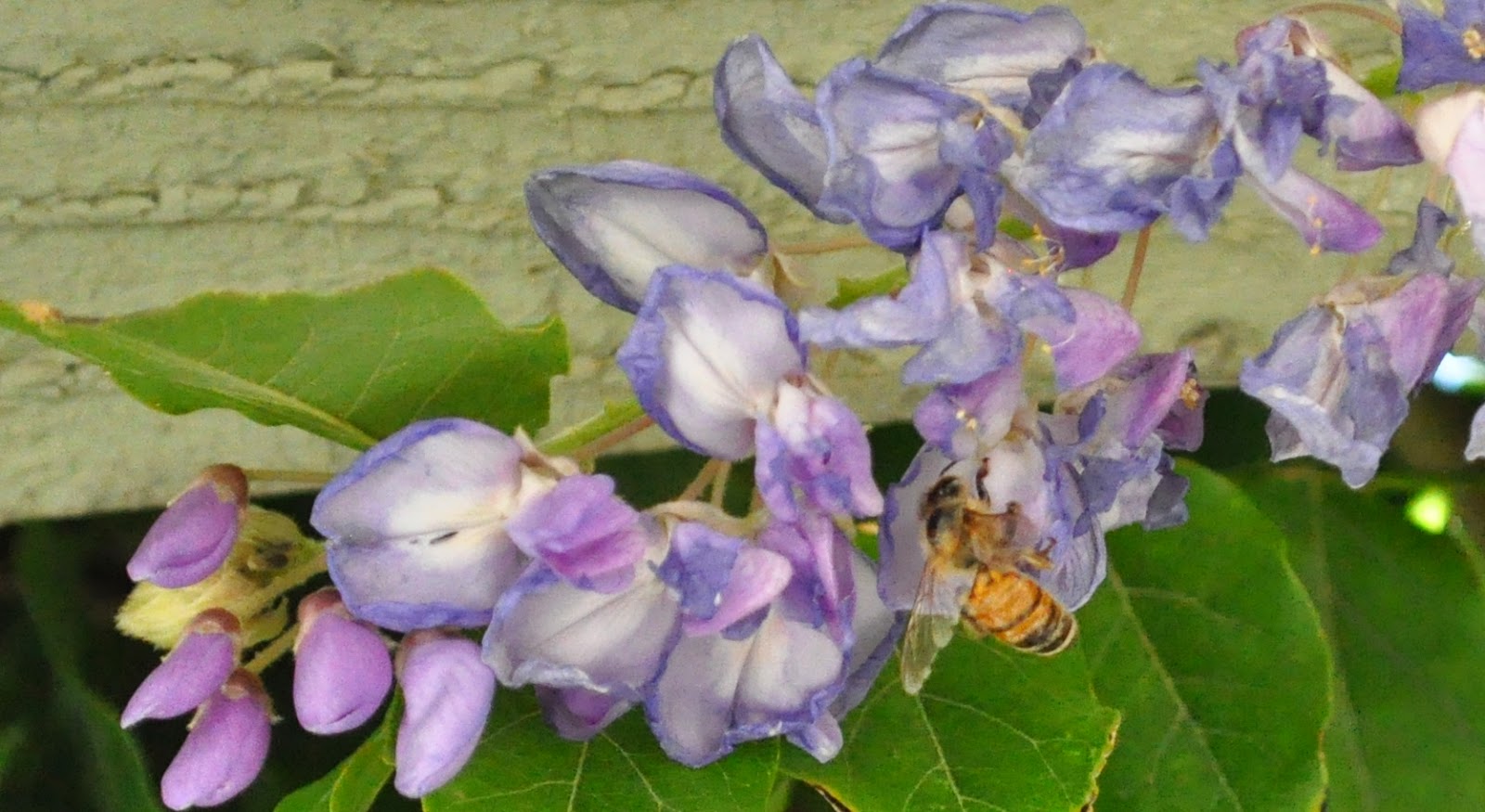 Honey bees and bumble bees love this stuff.  While taking this bee's portrait, I could hear bumble bees buzzing overhead.  No sweat.  Bees don't bother me cuz I don't bother them.  Until today. 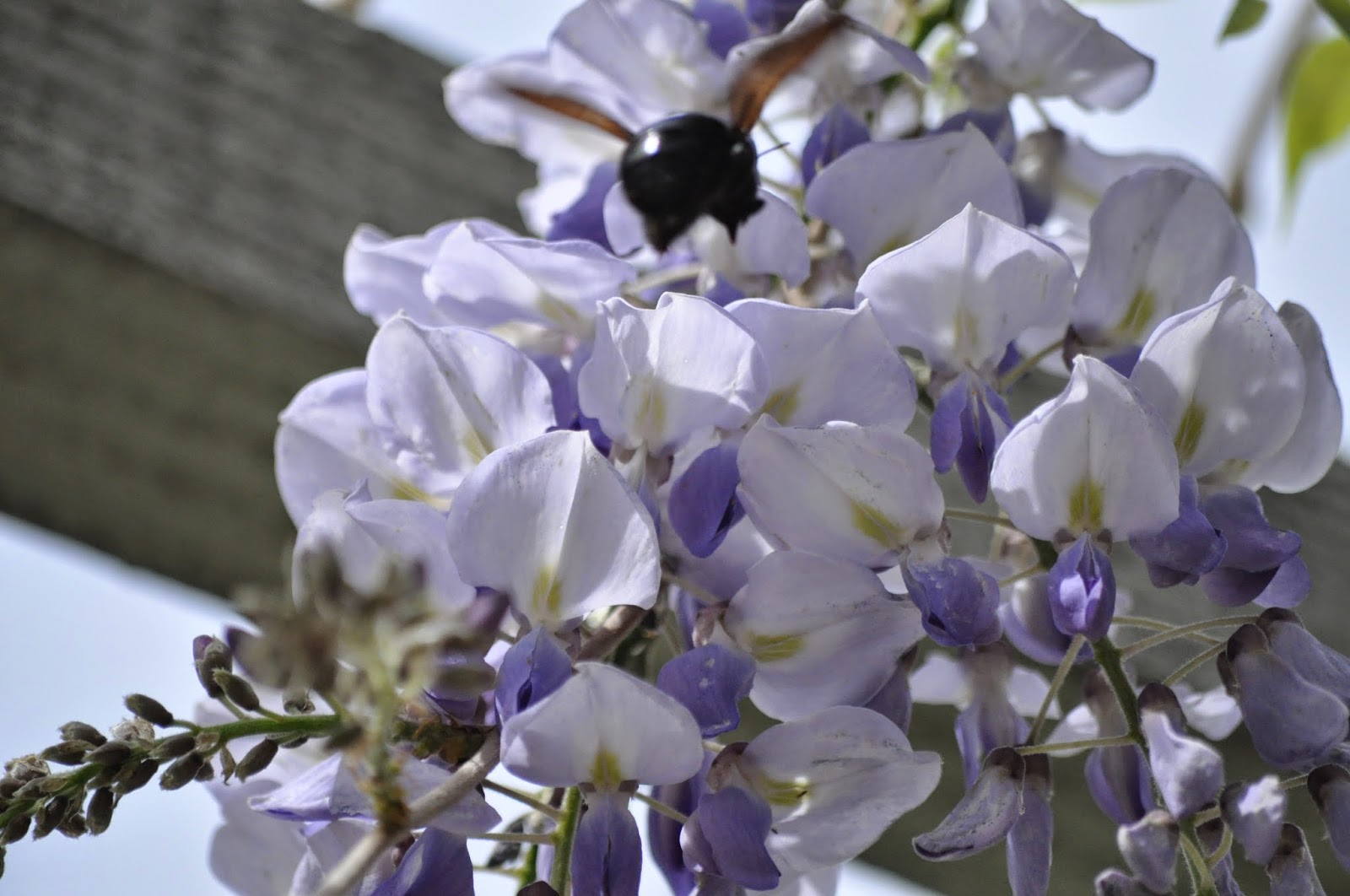 My freshly shampooed hair (I used WEN Winter Cranberry Mint today.) must have attracted a big, fat bumble bee because it latched on to my hair and wouldn't let go.  Rather than risk a sting to the scalp, I leaned to keep the bee suspended away from my scalp until I could reach something to shoo it away.  I reached for Ajax's slobber cloth hanging on the patio.  Shoo.  Shoo.  Dang. Is that thing STILL hanging on?  I looked at my reflection in the glass to discover it was not a bumble bee.

It was a Japanese beetle the size of Godzilla.  These crazy things can't fly well at all; but their grip is strong.  I began hitting myself over the head with the slobber cloth.  Shoo.  Shoo.  Imagine what the neighbors must have thought.  Finally, the beast let go and fell to the patio floor only to fly at me again and again.  I wasn't having any of it.  I used that slobber cloth as if it was a Louisville Slugger.  Pop.  Pop.  Pop.  Slapping that towel as if I was in the basement of the Bakersfield High School gym.  Soon, I wore the creep down with an exceptional snap to send it on its way.  As it flew away I could feel every inch of me turn into one Godzilla sized goose pimple.

Dang those things are creepy.
Posted by MAYBELLINE at 5:37 PM

Maybelline, You had me laughing with your description of the wisteria seed pods. Of course, I'm not familiar with the anatomy of Brahma bulls or grinches either for that matter, and I haven't seen any seed pods (or flowers) on our wisteria for years.
Having that beetle in my hair would certainly have given me the heebie-jeebies! Not to be a know it all, but I don't think it was a Japanese Beetle because it is my understanding that we don't have them in California. But we do have their cousins, the Hoplia Beetle. Here is a link to the UC IPM website that gives info about the Hoplia beetle: (which have already visited my yard a few weeks ago and did their damage!)
http://www.ipm.ucdavis.edu/PMG/PESTNOTES/pn7499.html

Personally, I'd rather have a bumble bee in my hair anyday versus THAT ugly critter. UGH!

Love the wisteria! I have a "small" one and I keep it out at the veg garden because hubby is one of those that HATES the fallen petals. The vine was gorgeous this year and only I got to see it--HA! His loss.....

Maybelline, being attacked by a bug that won't let go is a scary thing. Surprisingly bugs here in Nebraska seem to be at a minimum this year. Even the dreaded mosquito population has dwindled. It's been very wet this year so that does surprise me. Maybe it's a blessing from the late frost and the bug larvae was killed along with the garden plants. We here are still in a rain and severe weather pattern. More wind, rain, hail, and tornado possible for today and tonight. I hope my newly planted corn sprouts make it. I can't replant to many more times as the growing window is drawing short. My tomatoes that got the whiff of weed spray look like they might be recovering but it might be a while before they actually produce any thing. They do have a few green tomatoes but are not producing any new blooms. This has been the worst gardening year ever but in the tradition of gardening, I'm never never never going to give up. I will have a harvest of something.

Have a great bug free day in the garden.

You are right, Maybelline. That must be the fig eater beetle. I have that one, too! I find the larvae in the compost and sometimes when I dig in the soil. One of the itinerant cats (before he became a resident) was digging up the larvae and eating them before we realized he was homeless and probably starving. The larvae must be a good source of protein. The cat now has proper cat food and a home! (with us)

Sue - Glad you could enjoy your wisteria. You must have some very pretty compost.

Dave - Hang in there. We don't have control of the weather/climate. It could be nature's way of resting the soil.

Dorothy - Whenever I find those grubs, I set them out and watch the mockingbirds and scrub jays gobble them up. Nice that you have a garden kitty.

Maybelline, When I lived in Pennsylvania, we would get Japanese beetles on the rose bushes and they do have very sticky feet! I live in Pasadena, CA and while I haven't seen any of those in my garden, I have see the June bugs. They are so big and clumsy. They will fly right into your head!

The Wisteria is so pretty. I wish I could plant it, but I am a renter so I try my best to keep the majority of things in pots. I think I am already pushing my landlord's limits, but oh how I would love those beautiful lavender flowers all over my bungalow!!