Garden Progress During a Drought.

What the heck?!  Blogging sure has dwindled down to a small trickle just like the flow of the good ol' Kern River.  Even though the drought is taking its toll, production in the garden continues.  Here's what's going on: 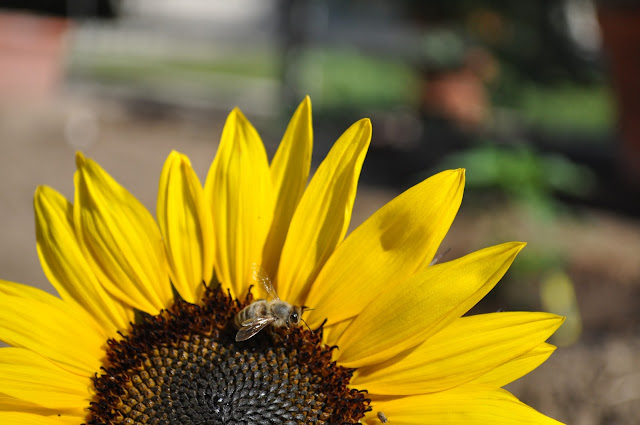 Dwarf sunflowers track with the sun and are enjoyed by pollinators.  I doubt that I'll harvest and roast the seeds.  These flowers are used to attract pollinators, provide some short shade, and brighten the garden.  Only about half of the seeds planted germinated.  I'll blame it on the source.  Maybe I'll save a head of these seeds to plant later. 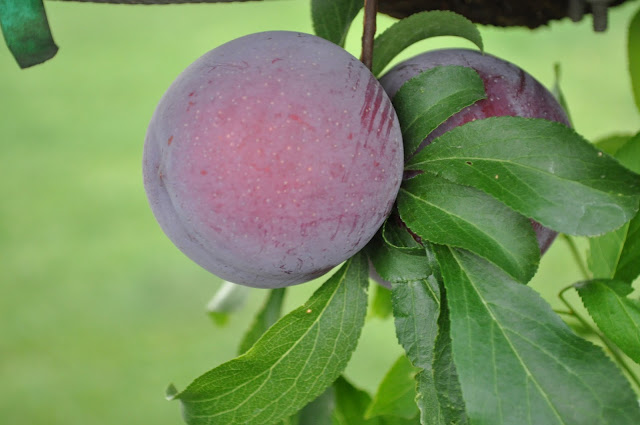 Santa Rosa plums were not abundant this summer; but there were more than last summer and so very delicious.  There weren't enough to meet the demands of munching in the garden and jelly.  Munching wins everytime. 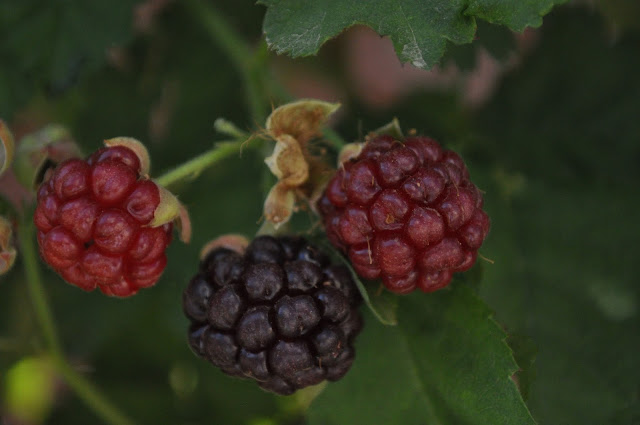 Thornless boysenberries  were productive enough to freeze some to enjoy later and fulfill the garden munchies.  Ice cream?  Cobbler?  Delicious. 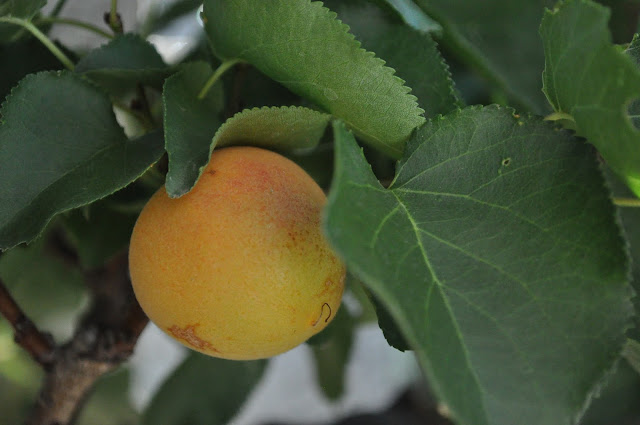 Blenheim apricots produced just like the berries.  Some in the freezer and some in my belly.  These are my favorite and are evidence that there is a God.  Dang it, they taste just like summer. 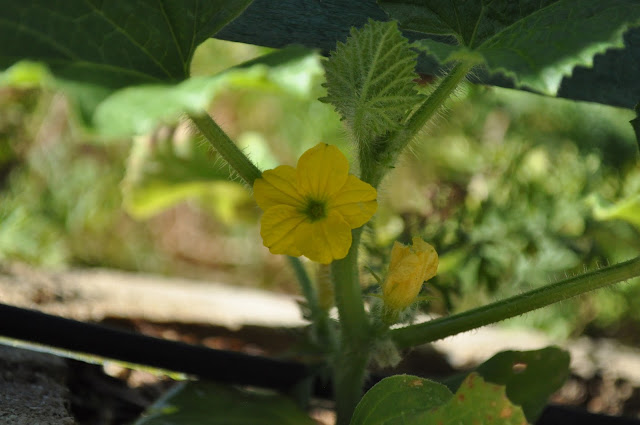 Here's a variety of cantaloupes I've never tried before.  The seed package describes the taste as similar to pineapple.  We'll see.  Moon and Stars watermelons are also planted in the garden.  They aren't expected to be harvested until late summer. 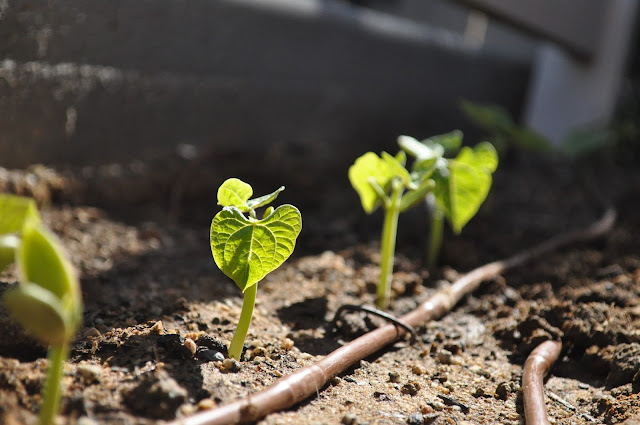 String beans are vigorous where a failed thornless boysenberry once dwelled.  I'm not a fan of green beans; but Farmer MacGregor enjoys them.  Surplus beans will be housed in the freezer for MacGregor and a garden gnome to enjoy during the winter. 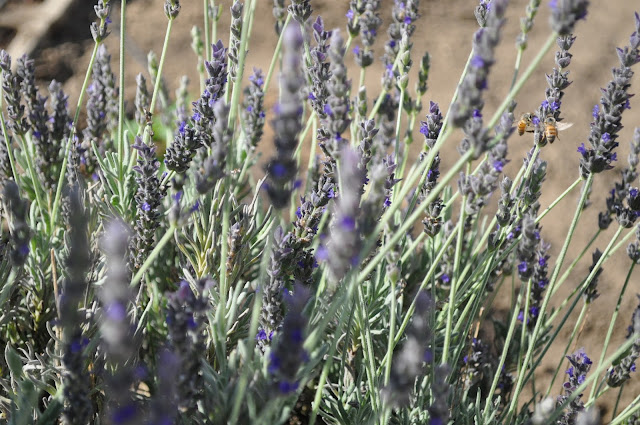 Lavender is drawing the the honey bees too.  I've never used it to cook (except for Herbs de Provance); so I might give it a try.  Ice cream?  Creme Brulee? 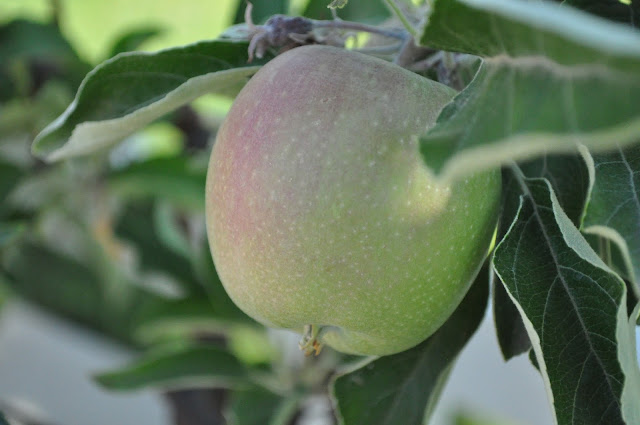 Granny Smith apples look to be having a banner year.  This little tree that I thought was going to die from scald has made a great comeback.  Since I eat an apple each night, I don't think these will be used for anything other than munching. 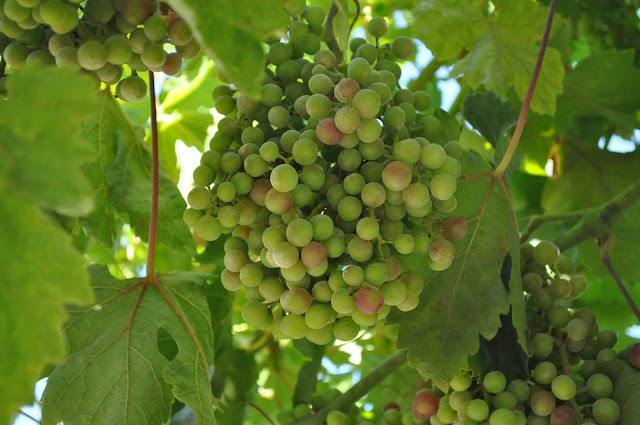 Red Flame grapes are coming along; but there are some problems with some bunches and leaves that the local farmers' cooperative extension need to be consulted about.  At least, it's providing great shade and shelter for the scrub jay family nesting on the arbor.

As for the drought, I have very strong opinions that I'll save for another time. 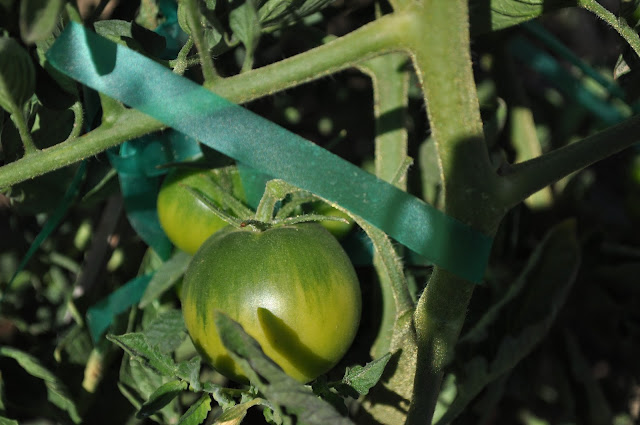 Afterthought:  I forgot to list the biggest resident in the garden this summer - tomatoes!  Here's the variety, the amount, and where they came from:

Better Boy (6 plants from Floyd's) -  These are planted in a bed that has been solarized to kill root knot nematodes.  4 out of 6 plants are thriving.  As the temperatures have increased, the plants are looking healthier.

Big Beef (1 plant from the Tomato Lady at the Haggin Oaks Farmers Market) - The Tomato Lady needed to reduce her inventory; so a dollar bill won a healthy plant to try out.

Champion (6 plants from Floyd's) - These are living up to their name.  All the plants are growing vigorously with many blossoms and tomatoes (non ripe yet).

Gold Currant (1 plant from a bird pooping at the front step) - Several years ago, a co-worker gave me an heirloom plant she started from seed.  The thing would never die; so Farmer MacGregor had to yank it out during the winter.  Each year, it sprouts somewhere in the garden.  The current Gold Currant sprouted last year at the front step and thrived through our mild winter.  It grows a top hedges (see header photo) for about 8 feet and has been producing grape tomatoes the entire time.  It's a keeper.

Super Sweet 100 (1plant from Walmart) - What the heck.  These were out on a rack at the entrance to the dreaded Walmart; so I made the trip a little bit more enjoyable by picking up a tomato plant.  We'll see.

You have a lot going on there. How lucky you are to be able to grow such a wide variety of things. I'm most jealous of your apricots.

Well that made me want to move to California. I am coveting the sunflowers the apricots and the apples...it all looks great. Good to see you are still blogging:)

Great job! It is interesting to see how the plants have varied from other years. They seem to be fruiting and ripening a bit earlier this year. Drought related?

Sue - you should be jealous of the apricots. They are what heaven will taste like to me when I die.
Far Side of Fifty - you're going against the flow. Everyone is leaving California.
Steve - I agree. The harvest calendar is earlier this summer. Boysenberries are usually harvested in June. I'm pretty much finished with them now but started in April. Could be drought related but I wonder since I'm in control of their irrigation. My garden is not suffering from the drought because the system is very efficient. But more on my opinion regarding the drought later.

If you love apricots but are unable to grow your own, please buy and enjoy apricots from California. The farmers here really need your support. Thanks.