Patience is a Peachy Virtue 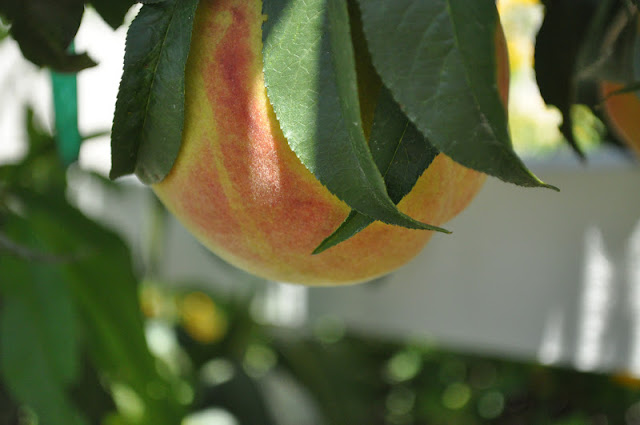 January 2009 - A line of fruit trees was planted along the garden fence with hopes of a small espalier orchard.  For the most part, the undertaking has been successful.  Some trees thrived more than others.  The first nectarine tree was pulled out in early 2012 and replaced.  It's replacement is thriving.  Another tree that was planted in shaky ground was the O'Henry Peach.  Growth was only evident at the ends of the limbs and not very robust.
Even though it produced a few peaches, it was pretty measly.  When starting a young fruit tree, fruit should be plucked to encourage plant growth rather than fruit production.  I can't do that and that's one of my weaknesses.  Soil was amended and fertilizer was applied along with essential irrigation to ensure a healthy tree.  All the trees receive at least 3 applications of dormant spray during the winter too.  Still, it was kinda measly.  The trunk appeared to be damaged from sunburn/sun scald.  In 2011, Tommy Bahama umbrellas were erected for protection from the Bakersfield baking sun.  But early in 2012, while cruising the isles of Lowe's, I spotted some tree wrap in the discount bin for only $1 a roll.  Rather than use the umbrellas in 2012, the trunks of the peach and apple trees were wrapped (loosely) with the new find.  Note:  umbrellas don't work so well if an occasional wind picks up.  The umbrellas could end up folded inside out and in the vegetable beds.
The results are great.  Even though the juvenile peach continues to cast off fruit it can't hold, there are a few monsters on those well shaded limbs.  The apple tree is also sporting positive results this summer.

Your orchard is looking good! The one peach tree we planted when we moved here died many years ago from borers. So I am at the mercy of what is available at farmers markets and roadside stands. Never ever from the supermarkets! Enjoy the fruits of your labor!

Wow, thanks for the lesson on how to espalier. I have a peach tree in the back yard and am trying to do the same. No edible fruit yet...maybe next year.
Yours looks great!

Your so fortunate to have such beautiful fruit. We had a late freeze--NONE of the cherry, peach, or apple trees are bearing this year.

You should see my O'Henry. It's about to go O'BreakinHalf because it's so loaded with peaches. I've got it propped up in about five places. I just wish it would get big and strong enough to sustain the load of peaches it produces. Must be about 50-60 of them on the tree this year.