And Now There Are None 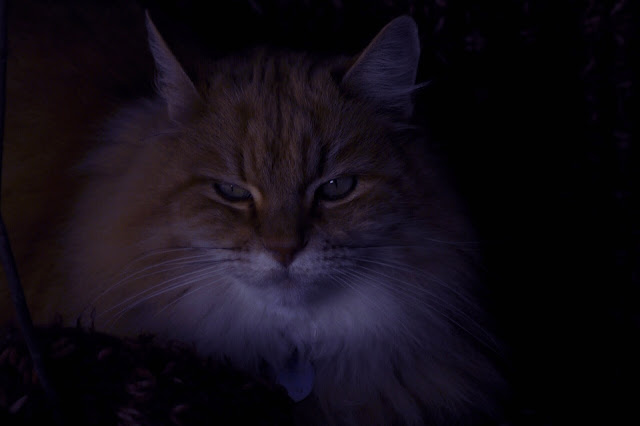 Maybelline's Garden doesn't have a garden kitty.  Pumpkin passed from this garden to the next on Sunday, March 10, 2013. She was estimated to be 20 years old.  She was found yowling one afternoon up in a neighbor's cypress tree by my oldest garden gnome. She was a tiny handful of orange fluff that rode with me in a work truck until she was big enough and strong enough to live in the garden with Licorice.

Pumpkin was a huntress.  Gophers, rats, hummingbirds, and most especially mourning doves were her speciality. Like most cats, she would leave what remained of her kill at the patio door - narrowly missed early in the morning as I stepped out to fill the breakfast bowls.  As she aged and suburbanization encroached on our garden, hunting was only a sport.  A form of entertainment.

I'll miss Pumpkin.  She liked me and every dog that she trained.  As a kitten she would nap on the woolly back of one of our Great Pyrenees.  Another Pyrenees was her best butt sniffer.  She even charmed a couple of English Mastiffs.  She would prefer to avoid a fight; but when backed into a corner by a stray she could hold her own.

The garden gnomes referred to Pumpkin as "the Devil Cat"; but I called her "Doo Doos".  She was sweet and as soft as dandelion down.  She was a good cat.  I will miss her.  I already do. 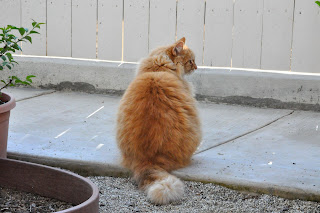 Posted by MAYBELLINE at 7:52 PM

Oh, I am so sorry for your loss, but she had a good life and made it happily to a ripe old age. Hope you buried her in the garden she loved and something wonderful will grow to commemorate her.

Yes Lo. Pumpkin rests amongst some roses where she would occasionally nap. Thank you for your kind words.

She sounds like she was a wonderful garden kitty living a very long, loving life.

She blessed your life by making it better and she couldn't have picked a better place to be... Peace to you this day...

I am so sorry. It's hard when one of our little furry friends passes on. She was a beautiful kitty.

So sorry for your loss. We've gone through this before. My wife can never let go of them, even when it's time to say goodbye. We both felt terribly when we had to let a cat go, for one reason or another, until a vet related this golden observation: "Don't feel bad. Don't ever feel bad. For you rewarded this soul with the lottery of a warm and comfortable life. Most cats do not win the cat lottery of luxury and love that you provided. Never forget that."

I hope this helps.

Thanks Bill. The bad part about having a pet doesn't last near as long as the good.

Thanks to everyone for your kindness.

Oh Maybelline, My heart goes out to you for the passing of your dear pet. She had a wonderful long life, but I know it hurts so much. My beloved inside cat, who was 15, passed away on Veteran's Day in Nov. I had thought I might honor her with a blog post, but I just couldn't do it. I still miss her every day.

Dorothy, give a try at a blog post for your kitty. Thanks for your kind words.