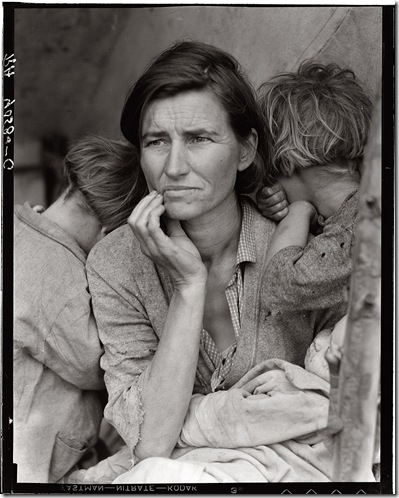 On October 17, 2009, the Dust Bowl Festival will take place in Weedpatch, California at Sunset Camp.  John Steinbeck’s book The Grapes of Wrath was set here.  The book was banned here.  The life of hardship that formed many self reliant, hard working citizens was realized here.  Many of the remaining Okies and their descendents gather to reminisce and celebrate their heritage.  The festival is from 8-3.

Weedpatch is a few miles west of Arvin.  It’s deep in farm country.  Potatoes, grapes, carrots, and a huge variety of other truck crops still vigorously grow in the southern San Joaquin Valley.

Interesting note:  The woman pictured in this famous Dorothea Lange photo , Migrant Mother , was the mother to seven children.  She was only thirty-two years old when this photo was recorded.

There is an excellent piece on the Okies of Weedpatch in Mark Arax's book, "West of the West". I think the piece is called "The Last of the Okies".

Thanks for the suggestion. I'll get hold of it and give it a read.