Last night, I returned to the garden even later than the night before.  This would, no doubt, allow ample time for the punk bugs to return and start chewing.  No luck.  The only thing I saw was an earrywig (earwig) on a carrot green.  I was so excited to find a pest that I fumbled with the flashlight and camera so long that it scrambled off to a more peaceful setting.  There was absolutely nothing in the cabbage patch. 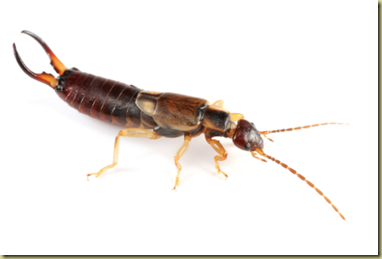 This morning I was out there before the sun came up.  Again, nothing.  The earrywig may be my only suspect.  During the wet years of 2005 and 2006, we had an enormous amount of these creepy crawlies.  I’ve learned that they can mow down seedlings.  I’ll keep my eyes opened; but for now the earrywig is public enemy #1.  Creeps!

Posted by MAYBELLINE at 8:25 PM