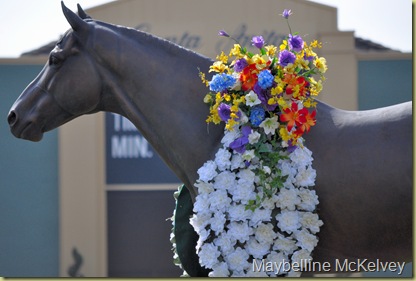 It was time to get out of the garden and do something fun.  Farmer M and I decided the garden could last one day without us toiling.  And it did.   On Saturday, we went on a road trip to Pasadena.  I’ve never been to a horse race an wanted to go to Santa Anita to experience the atmosphere and admire the horses.  It was an easy driver up the Grapevine and over the ridge.  There was only skiffs of snow up in the higher elevations and traffic remained smooth all the way to Pasadena. 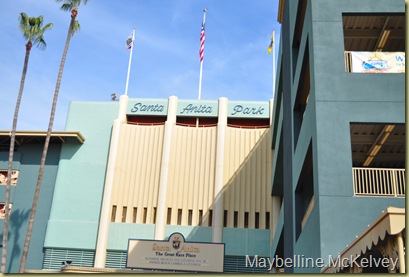 Finding the track was a snap and so was parking.  While standing back at the ticket booth to determine what we needed to purchase, a gentleman came up to us and gave us tickets and a few words of advice and direction.  Very nice.  I bought a program and we went to explore the facility and admire the horses.

The track opened on Christmas Day 1934.  There’s a ton of art deco.  Up high on some buildings are these metal cutouts of horse racing. 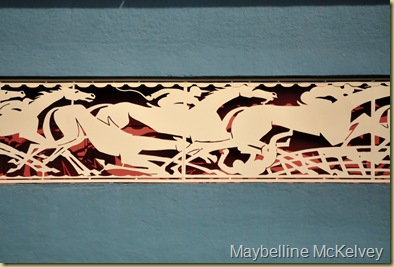 As the horses came out to be paraded in the paddock prior to their race, I noticed they had their tongues wrapped with tape or plastic wrap.  Most were annoyed.  I had never seen that before.  We were told this was done to prevent the horse from swallowing its tongue.  I had never heard of such a thing. Farmer M decided that he liked the looks of #4; so this was the horse we watched. Dud.  We went back to take a look at the horses for the next race.  I thought #6, Alabama Boy, would be the one that I would watch.  He was dead last! 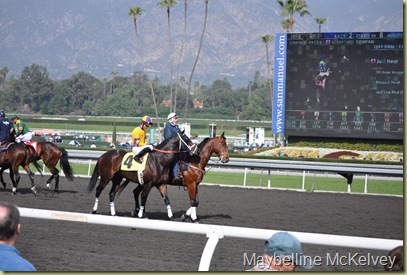 We had some expensive lunch.  Corn beef sandwich, turkey sandwich, potato chips, bottle of soda, and a bottle of beer totaled more than $30.  Preposterous.  Not only that, but the beer was in a plastic bottle.

Now I wanted to learn about betting on the horses.  My mother requested that I pick the 3rd horse in the race and bet the minimum amount to win.  Gato Go Win was that horse that I invested $2 on. 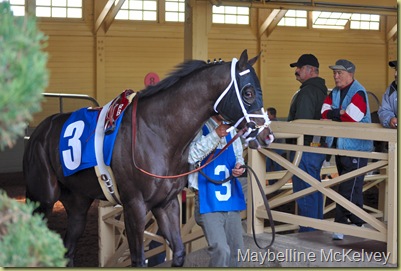 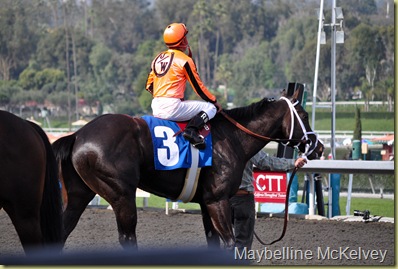 Since the sight of the thoroughbreds was disturbing to Mr. M, we said farewell to Santa Anita Racetrack and moved on to the Huntington Library. 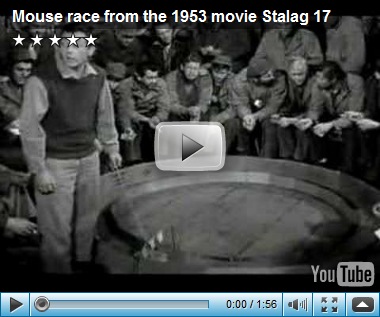 Note:  I’ve been told that the horses have their tongues tied during the race to avoid damaging their mouths and the help with breathing.  Research continues.

Posted by MAYBELLINE at 6:02 PM

I think tongue-tying is the least of it. I recommend you read some Bill Nack. He's a great sportswriter, and lifelong friend of Roger Ebert, who also became the official biographer of Secretariat. He writes beautifully about Thoroughbred racing and heart-breakingly about some of the abuses.