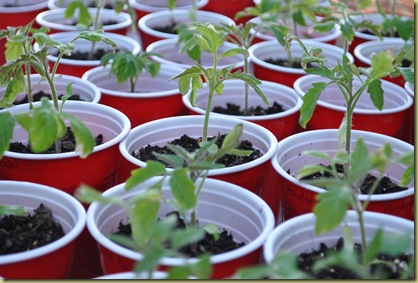 During Spring Break, other types of tomatoes (the real ones) go wild.  The heirlooms were planted on March 1, 2010.  Less than one week later, the seedlings sprouted on March 6, 2010.  On March 28, the seedlings were transplanted into the kegger type Dixie cups until they are ready to be planted in the ground.

Here’s how the varieties look today. 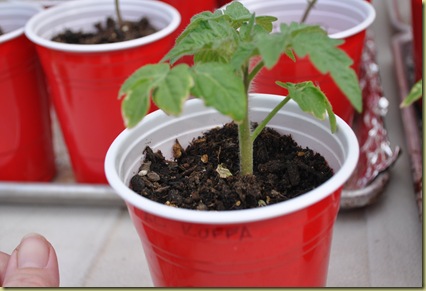 Al Kuffa (red) – This variety is the stockiest of all the varieties I’m growing this season.  It really looks like a healthy start.  Mule Team will be another red competitor.  Manicure mandatory. 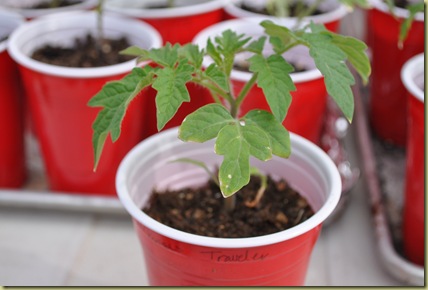 Arkansas Traveler (pink) – Taller and more slender than Al Kuffa.  This pink variety will compete with Henderson’s Ponderosa Pink for the Best in Pink competition. 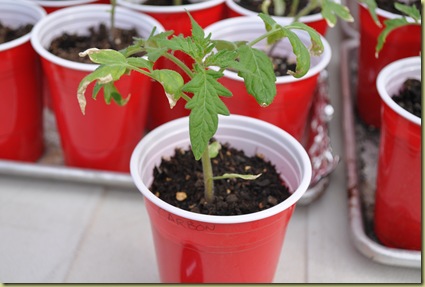 Carbon (purple) – Will win the purple competition by default.  It’s the loan entry in this slot. 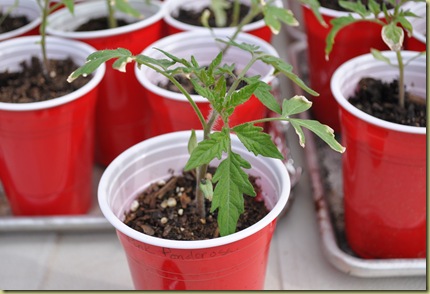 Henderson’s Pink Ponderosa (pink) -  These seeds were sent to me courtesy Baker Creek Heirloom Seeds.  This is supposed to be a big, beefy variety introduced in 1891. 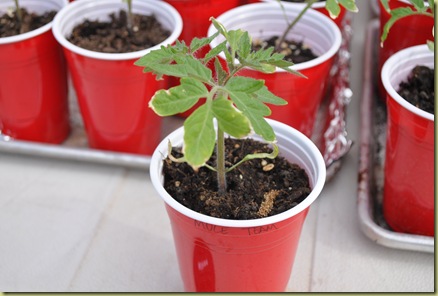 Mule Team (red) – These were ordered because they were out of Jersey Girl.  They are described as being resistant to heat and disease on vines that bear heavily over a long season. 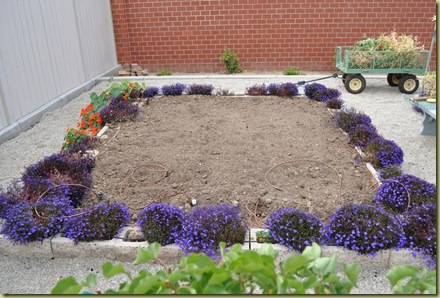 One bed is ready to accept 16 (4X4) of the 53 tomato plants.  53?!  What the heck was I thinking?  There will be a second bed planted with tomatoes once the peas, garlic, beets, carrots are finished.  That leaves me with 21 plants to adopt out.

Farmer MacGregor will be designing and constructing the frames to string these plants.  Stay tuned.

Posted by MAYBELLINE at 7:46 PM

Your plants look wonderful! Ours were planted in the middle of Feb. and are about the same size...so much for getting a head start :) Thanks again for the Arkansas traveler seeds, they all came up and look good; can't wait to taste those.

BTW....are you keeping these outside all the time?

*Maureen - The seedlings are now outside all the time EXCEPT for Sunday when the wind was howling all day long. They were tucked away in the shed. I'll bring them back out this afternoon.

YOu haven't planted too many tomatoes. Two words for you: Tomato Jam. Takes pounds and pounds of tomatoes to make it and it's fabulous.

*Lisa - I have too many plants for the plans in my garden this summer. Now, how about that tomato jam recipe?

Wow! We are going to need a bigger bed.LOL! Mr. MacGregor will have to get out the saw. I am going to be interested in which you tomatoes did the best and had the best flavor. Your tomato plants make my six little tomato plants jealous LOL!

*Hocking - I'm picking Al Kuffa as an early favorite; but I'll keep tracking all of them here.