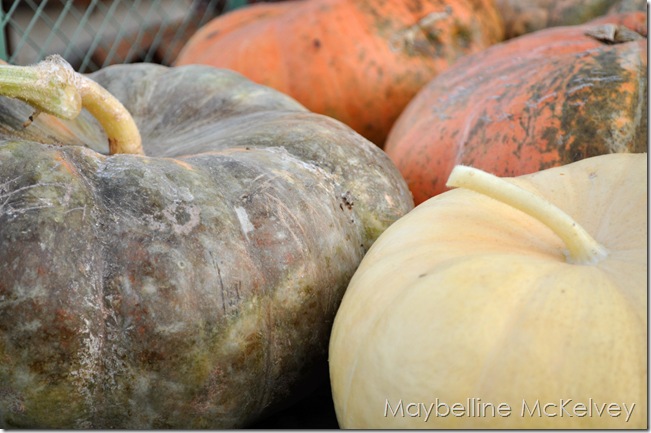 Last year at this time I was enjoying a bounty of Cinderella Pumpkins.  This October…zip, nada, zero.  I experimented with the six leftover seeds from 2009 that had inadvertently been left in the house while it was being fumigated in March.  The seeds were planted in July and a three of them germinated, grew, and bloomed. The pumpkin patch was plagued with squash bugs.  By the time the plants were ripped from the ground there was only one very small squash at the end of one vine.  Oh well.  It was only an experiment.  The hypothesis was that none of the seeds would germinate.  The conclusion is the hypothesis was wrong.  I don’t know whether to blame the fumigation, the planting schedule, the age of the seeds, or the squash bugs for the failed production.  Pumpkins will most likely be planted during summer 2011 simply because I love the fall – October specifically.   Happy October!

PS It rained today!  Dang it.  That’s so great.

Posted by MAYBELLINE at 9:20 PM

That is what I say....it is all an experiment. Also, what kind of dog is on your header? He is so adorable. I don't think that kind of dog would like Texas with that heavy fur coat, but he is cute!!

I love the shapes of them, but although I'm fond of squash and pumpkin I've never been fond enough of it to take up garden space with them. One season we had a volunteer pumpkin in the compost pile - that was our halloween jackolantern.

*Amy - That's a Great Pyrenees. It's too hot in Bakersfield for them unless you let them in to lay on a tile floor in air conditioned comfort.

*Aunt - Squash does take up a ton of real estate.