Oh sure.  It’s hot.  Gardening happens 12 months out of the year around here and I really get burnout in July.  The heat pushes me to the point of not caring and letting the garden take care of itself (for about 5 minutes).  Like most gardens, tomatoes are exploding along with squash and peppers.  I’ve been canning salsa (both 5 alarm and 1.5 alarm varieties) and tomatoes to preserve summer’s bounty at least until Thanksgiving.  That’s why I haven’t been blogging lately.  Any spare time is used in the garden or canning the harvest.

The heat and my persistence has rid the garden of hornworms for now.  This is good news for the gajillion pounds of tomatoes yet to be processed.  Everything is moving right along nicely. 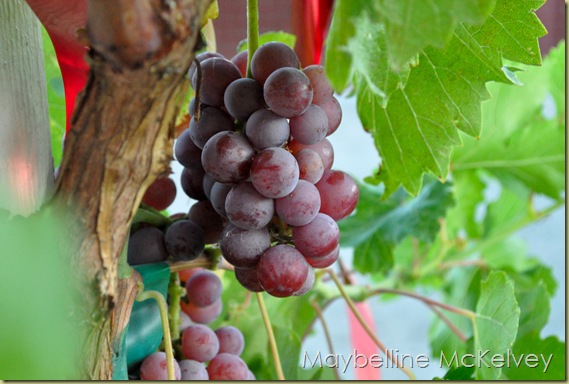 Red Flame Grapes continue to ripen.  This vine really thrives with the hot, hot temperatures.  The grape arbor is laced with scare tape that seems to be keeping the birds out.  This is the 2nd year for the vine in the garden.  Last year there were a few grapes produced to my surprise.  2010’s production  has increased by about 5 times.  The vines were pruned when dormant and fed sporadically with Dr. Earth.  I don’t apply as much water as Farmer MacGregor.  His method seems to be working well. 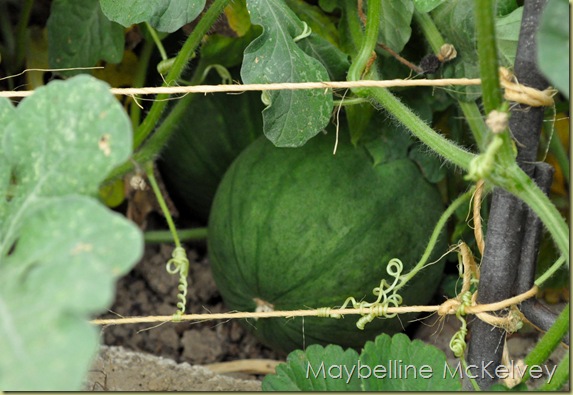 Malali Watermelon also are going bonkers with the heat.  I counted about a dozen the other day.  Keeping the vines in bounds of the raised bed may be helping but this is the 1st year I’ve grown this variety.  As the vines creep over the blocks and out into the garden paths, I turn the vines back over on top of itself.  This is shading the melons growing below and the blossoms are on top for the bees to handle. 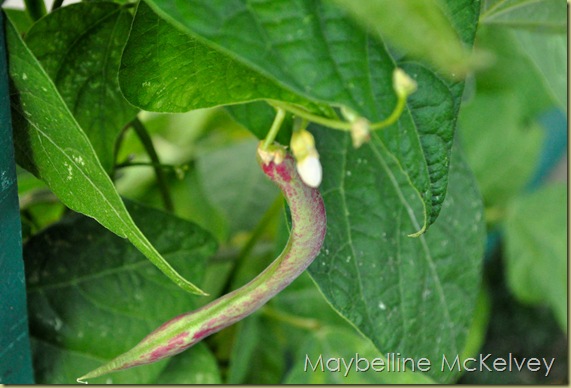 Borlotto Solista Beans were planted on May 18.  Here is the progress 2 months later.  They love the heat too.  I planted Summer Savory around them; but the shade from the vines is preventing its development. 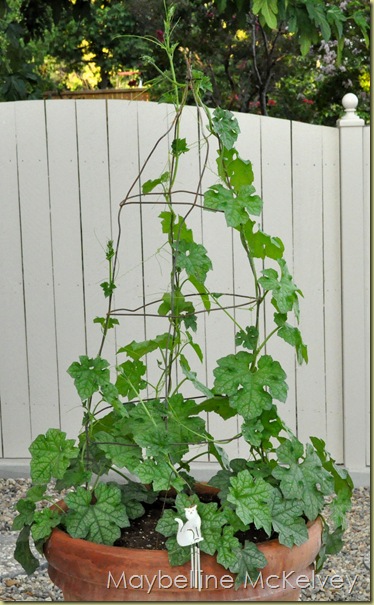 Luffa Gourds are thriving in the heat.  They were planted last month on June 18.  In the late afternoon, the leaves get a bit droopy so I give the 4 vines a little drink and all is well.

Hope you’re thriving in the heat or at least coping.

Posted by MAYBELLINE at 5:40 PM

you are not kidding we stayed over night Thursday in Bakersfield and it was surely hot. Now I get the whole "swamp pants" thing. Your garden looks like it's bursting with veggies. Hopefully ours will be when we get home. Great pictures!

*And: Hope you enjoyed your stay despite the heat.

Boy, I'm with you on the heat part!! Your Grapes are awesome and plump, love the gourds and beans and the little melon. It inspires me to grow more of these things next season.

Grapes! Love me some grapes! Especially those Red Flames!

We enjoyed our brief stay overnight at the Marriot in town. My husband had some work in Bakersfield last Thurs and we were passing through on our way to my Dad's in So Cal. All I thought about was seeing your garden! :)

*And: I had to look up where the Marriott is located in town. Hope you enjoyed your stay. There's another hotel downtown that has recently been refurbished and is the hub of activity with food and drink that have been given high marks. The Padre is an old landmark downtown; but the remodel looks great.

Coincidentally, I was in Southern California on Thursday night.

*Peeoknee & Bill: Do you grow grapes? It's that time of year when grape harvest is in full swing around here.

The grapes look awesome..Thanks for sharing the photos...