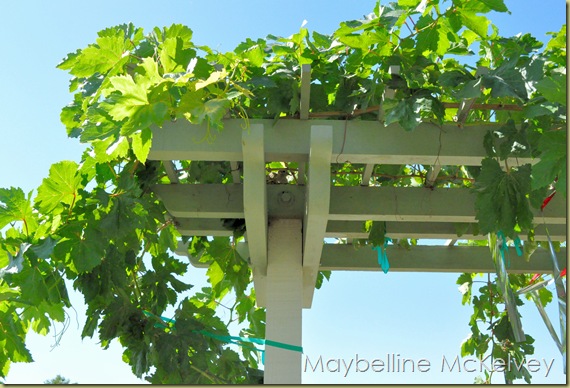 The Red Flame Grapes did way more than I expected from them this season.  The 2 year old vine grew up and over the arbor and is now growing along the fence.  Fruit production was at least 10 times more than the year before.  Although the grapes were kinda small, they had plenty of flavor.  The scare tape still dangles even though there is no more grapes to protect from pecking birds.  It still keeps the birds away from tomatoes, strawberries, and peaches.

The scare tape works really well.  Birds stay out of the garden.  I don’t know if it’s because of the tape or the garden kitties.  Pumpkin (one of two garden kitties) is a menacing creature and always enjoys a good cut of meat.  Since she lounges in the vegetable garden, she may be the one responsible for keeping the birds away.  However… 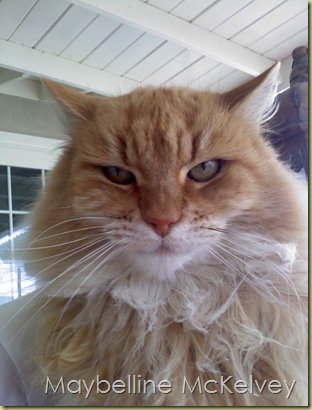 …it seems that birds could get used to the scare tape and disregard the metallic glimmer as if it were only a disco ball.  Thankfully, the local birds remain scared of the tape and Pumpkin - except for the birds that I believe are one of God’s dumbest creatures. 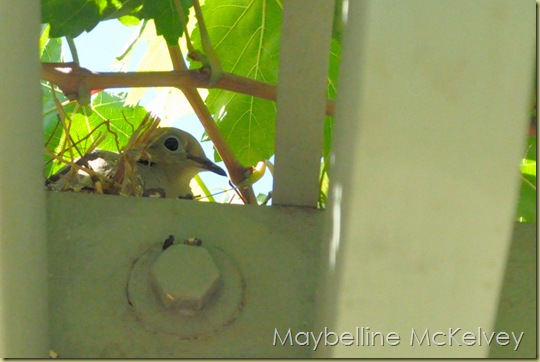 That’s okay, Pumpkin.  I know you’re letting this one fatten up before Dove Season officially starts on September 1.  Hope you have the discipline.

Posted by MAYBELLINE at 9:59 PM

That is the perfect picture of Pumpkin.

By looking at Pumpkin's face....it looks like she is up to something. Obviously, the bird is very comfortable in his disco environment. :)

That is one dumb bird..or perhaps he likes to live dangerously! Thanks for stopping by my Forgotten Old Photos blog..I am having a blast with the old photos! Come back again!
Your Gardens are beautiful:)

Your Pumpkin looks like my Clodomiro. But that's the only thing they have in comparison. The only way my Clodo is ever going to catch a bird is if one flies directly into its mouth and attaches itself to a fang. And even then -- Clodo still might not get it. We lost our birder Maybelline -- at least I think we did. The Hummingbirds -- meanwhile -- have reacted with a Happy Dance. We have four or five now. Had the one birder stuck around -- I'm sure she would have feasted on two or three by now.