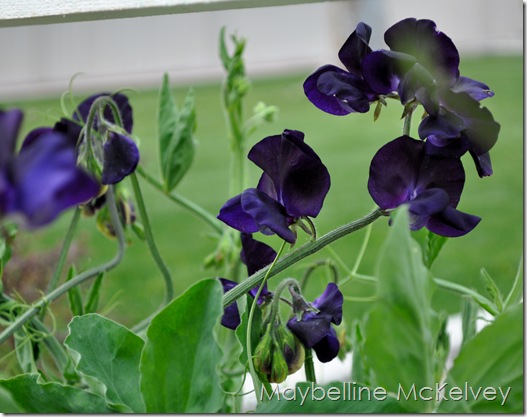 A couple of varieties of sweet peas were planted in the fall of 2009 to enjoy in 2010.  Starry Night and Royal Blue were planted under the espaliered trees with hopes they would climb the fence and fill the garden with blooms.  I thought something kept devouring the seedlings like a worm or something.  Something or someone was devouring the seedlings…Farmer MacGregor.  He thought the seedlings were weeds.  With his vigorous garden tending, there were only about a dozen vines that made it to maturity.  The blooms were sweet and the colors were beautiful.  The vines didn’t climb along the fence line as I hoped.  These varieties may have been more dwarf like than was advertised on the packets.

I’ll use most of the same criteria used for the garden crops with the exception of taste.  Taste will be replaced with scent.

I do like sweet peas but won’t plant them under the espaliered fruit trees in the future.  The ground beneath the trees will be kept clear to ward off any pests – especially borers.  I believe I’ll use a structure similar to the one used for the beans to grow future sweet peas.  In fact, I may try my luck at starting some in December 2010 for blossoms in 2011.  I’m only going to give sweet peas 3 out of 5 blooms and that’s mostly due to my planning.  I’m sure I can attain a higher rating with better planning.

Posted by MAYBELLINE at 8:27 PM

Sweet peas are a favorite of mine .. especially the wild ones. I think they speak 'country' and simple folk and whimsy .. now if I could find just one word to describe. Oh .. and they have to have a scent!

I need to head down to the hardware store and pick up some seeds to get started. Hope this late start doesn't effect the plants much.

When we first moved into our place, back in 1997, I broadcast the contents of about 5 packets of sweetpea seeds over our hillside garden.

They came up and bloomed beautifully, and then each year for the next 6 or 8 years they came back. Of course, they bred with one another, so by the 8th year, instead of having white, pink, blue and magenta flowers, they were all a uniform magenta, but so sweet and vigorous!

Around that time, we hired a gardener who does a winter clean-up of the beds, and year by year the sweet peas have dwindled down to nothing.

See the benefits of sloth?

(I really need to talk with Marcielo this winter and sow some more sweet peas.)

*Aunt - You may be able to buy your seeds in bulk to save a bit of money. You may even consider wildflowers. I do know that those seeds come in bulk. Eden Brothers sells by the pound.