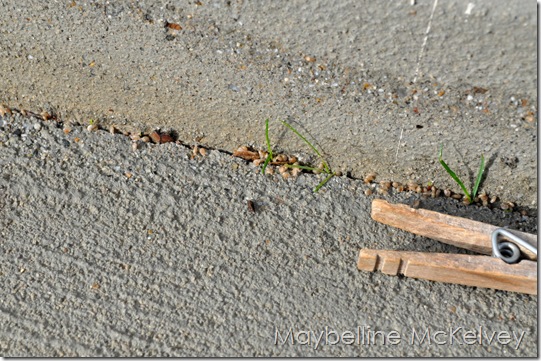 Note:  A clothespin was used for scale without considering the fact that many people do not know what a clothespin is.

The garden has recently experienced buckets of rain.  Hurray!  Leaves are washed clean.  Everything is fresh.  I noticed that something resembling sand grains had bubbled up at a joint in the concrete.  Strange.  Previously there was an alkali problem that Farmer MacGregor was treating with sulfur.  Was the rain so intense that sand bubbled up through the joint to the surface?  Wait a minute.  The native soil is junky clay.  This can’t be sand.  Zoom in for a better look-see. SNAILS!  RED ALERT!  There must be approximately 354 gazillion snails lining this crack.  Smokes.

Today, we cleaned up the mess made from what blew in from yet another storm experienced on Christmas.  After that, I dragged a flat shovel along this crack and may have scrunched about 297,000 snails.  That’s a far cry from annihilation; but it’s the best I can do today.  With a hearty list of predators, these little guys should help sustain another species for at least an hour.  Clear skies are predicted for the next couple of days.  Hopefully, some hungry birds will have their way with the remaining population.  The toads will most likely be hibernating for a while longer.

In the meantime, we need to get some rest from all the garden chores completed today. 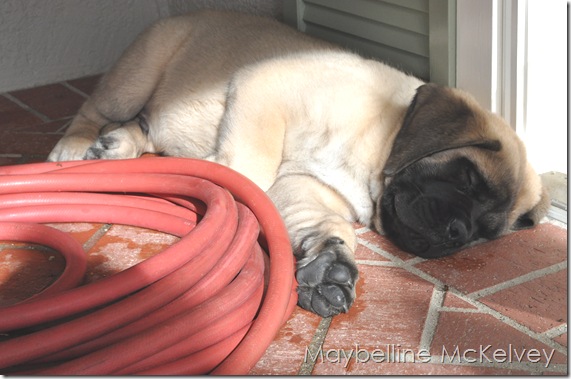 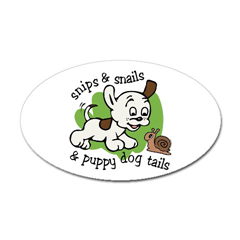 Posted by MAYBELLINE at 9:29 PM

I've never seen so many snails before! I only get the occasional one here and there, and all I have to do is remove them. I hope some hungry birds to fly your way soon!

I've never seen so many before either but perhaps they were there and never made it to maturity.

As for eating them...I'll leave that to the toads.

Wow!! I guess the scraping shovel is the best idea.

The puppy is so sweet!