Our neighbor has a Bichon Frise named Emmy Lou.  Emmy Lou walks her 80 year old human everyday.  In fact, dearest Emmy Lou uses our front yard to do her “duty”.  Nasty little gal.  Her human takes her regularly to the salon.  For the holidays, she sported pink bows to match her new pink harness and lead.  Don’t let the feminine fluff fool you.  Emmy Lou believes that she is a mighty hound.  This morning her human reported that she fancied herself a coon hound.  It was all he could do to hold on to her hot pink reins as they approached our mailbox. 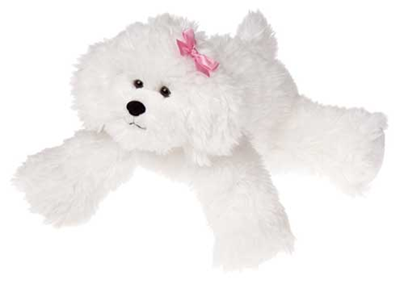 Not Emmy Lou.  Only a model for reference.

Her human thought old Emmy Lou had finally come undone.  Then, he saw movement.  He thought it was a cat.  He thought it was a really big cat – like a rag doll cat or something.  It was an opossum!  That ferocious Bichon had an opossum treed in the Texas Ranger.  That varmint blends in so well with the surroundings that I had a tough time finding it to take a shot (the Nikon variety). 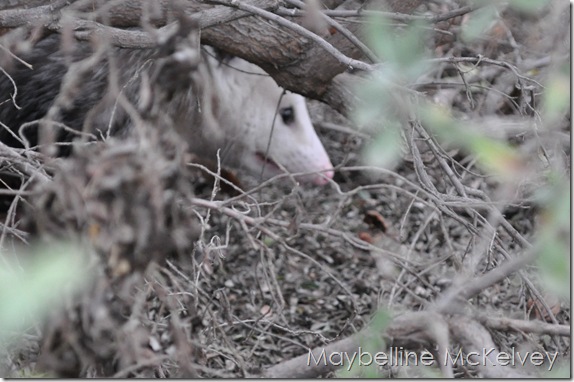 No one knows where this wee beasty came from or where it is now.  If it knows what’s good for it, it will stay away from my garden or the next shot I take of the varmint will not be of the Nikon variety.

Maybe this opossum is on vacation. We have them here in So. TX. I am fortunate to say I haven't seen one in over 2 years. I wasn't too excited about the one that crawled out from under the deck when we first moved in and I had the cats on the deck getting them familiar with the deck and surroundings. It was all in slow motion watching the opossum run, then one of the cats run after it and them me in final chase...all slow motion with the whole " no o o o o o " coming out of my mouth that the same time. Opossum got away under the fence (and headed to you in CA), cat couldn't get under the fence (luck for me) and big rock went in hole under fence immediately...and all other holes I could find.