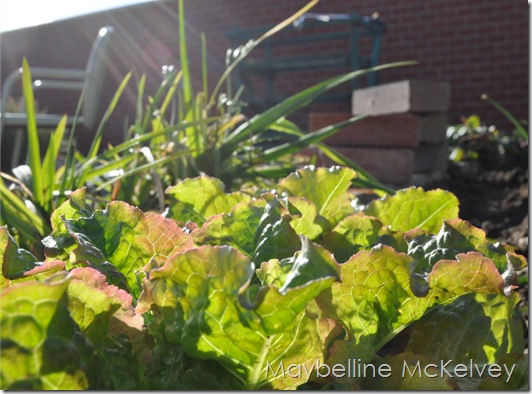 Supplies are running low here in Maybelline’s Garden.  Not much lettuce planted in the fall remains in the garden.  The lettuce started indoors is puttering along.  Three varieties are scheduled to be planted out in the garden this weekend in the hopes of having some spring salad:  Merlot, Saint Anne’s, and Tom Thumb.  The seeds will be sown in place to determine if jump starting lettuce indoors in the winter is worth dedicating the space.  I don’t like the way the seed starting process makes a mess of my kitchen window.  Starting seeds in place looks neater both indoors and out.  Perhaps I’m Jeffersonian in my garden preferences.  That’s alright with me.  He did alright (except for the the whole slave thing and the debt stuff).

Some Red-Cored Chantenay Carrot seeds will be sown amongst the lettuce in accordance to Louise Riotte’s prescription in Carrots Love Tomatoes.  Her book doesn’t explain why this combination is good.  A quick search online came up with nothing.  Nevertheless,  I’m giving it a try.

In the meantime, I would like to publicly change the person I want to be when I grow up.  For years, Aunt Bea from the Andy Griffith show was the type of person I wanted to be as I limped into my senior years.  No makeup.  Cotton dress.  Practical shoes.  No plastic surgery.  Simply age as nature intended.  Now I herald the beauty of Louise Riotte.  Practical clothes (elastic most certainly is involved). No fuss hair and a chair just like the one I have in the garden.  BINGO!  I only hope to know half as much as this successful Okie gardener.  Plus, living to be 91 is a bonus.  She would have been a great companion in the garden. 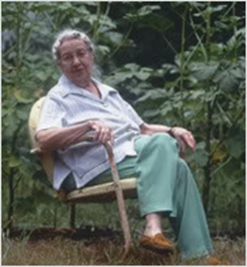 Posted by MAYBELLINE at 9:35 PM

We're planting a bit more lettuce next week as well...thought I'd wait till after the expected cold this weekend. I've also got a few more broccoli and cauliflower seedlings under lights that need to go into the ground. Haven't ever planted brassicas this late but alot of our fall plantings either bolted or are small....I figured I'd give it a shot.

Beautiful pic of your lettuce BTW!

Amen, Maybelline. I have a copy of her book, too. I've found that companion planting is definitely helpful. That said, we have lots of bugs here in the deep south. I always try to plant pest resistant varieties.

I agree about Louise. Plus she has a great name. As I near spring and another season of planting (in a new house) I want to thank you again for your blog. I look forward to checking in and getting direction every year!! you have the most beautiful garden i envy!